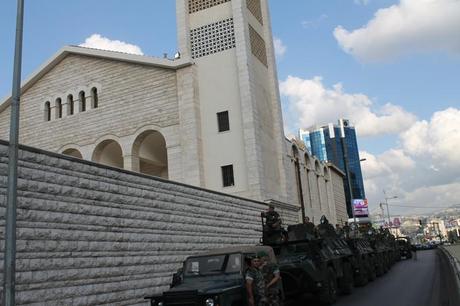 The Lebanese army, security forces and the union of municipalities in Beirut's southern suburbs have implemented a large-scale security plan in the area, al-Joumhouria newspaper reported on Tuesday.

The plan, which was carried out on Monday, included security measures around checkpoints and inside secondary streets in the suburbs, it said.

The armed forces inspected the IDs of commuters and the registration documents of their vehicles, the daily added.

Officials denied that security measures implemented at the entrances of Beirut's southern suburbs are no longer tight.

The officials, who were not identified, said that “the measures will always remain at the same level because the danger is still there.”

Beirut's southern suburbs had gone on high alert after a series of deadly car and suicide bombings rocked the area.

The blasts are blamed on Sunni radicals, retaliating against Hizbullah for sending its troops to fight in Syria's civil war by attacking the party’s base of support.

The attacks, which have for now stopped, began nearly two months after Hizbullah openly sent its fighters into Syria to help President Bashar Assad's forces.

The Lebanese army and security forces have also implemented security plans in the northern city of Tripoli and the eastern Bekaa Valley.

Gaby your comment is disgusting. Innocents were killed in those bomb attacks. Hezbollah are murderers but that does not justify any terrorist attack on Lebanese civilians.

when HA established its own security you guys whined and complained that this was not right. so they let the army takeover security measure, and you're still whining.

what is it you want exactly? easy targets for takfiris to kill civilians in dahieyh? your sectarian hatred has no limits.

On a lighter note: Please see this special tribute to Bashar:

insults are you bunch got left? that's pretty weak and lame

careful guys not to insult mooowaten's president! he cares more about bashar than anyone else like brave collaborators and fanatics! LOL

John Oliver rules! And Mowaten: do please change that flag you use as your avatar kid: yours has two stars in the middle, not my country's Cedar. Fhimna ma btisti7i 3a dammak, bas ma btisti7i 3a damm kil yalli 2atalon ra2eesak yalli 3ambitdéfi3 3anno?

maxx i know very well my country flag, and i will wear it on my avatar whether you like it or not.
if you want to give lessons start by not defacing my flag with that purple line.

It is called in physics: for every action there is an equal and opposite reaction.
Using their arms ONLY to protect the army-people--resistance equation ended up protecting Syria, tomorrow they will kidnap Jewish settlers and keep interferencing with other states business to draw in pain for the entire Lebanese state.

why "Jewish"? who cares what their religion is? the operative word here is SETTLERS, which means they attack, occupy areas, ethnically cleanse them, and then spread. how long till palestine is fully consumed by the cancer? where do you think they will spread next? the sinai desert? the jordanian desert? or the oil and water rich lebanon?

No, mate! Those were civilians who got killed in those attacks, not members of the Iranian Occupation Forces. That cannot in any way be considered as justified. "Terrorism" is defined as an act of violence committed against innocents in order to send a message to those who are actually responsible. Anger at Hizb's murderous policies should not be used as a justification of their rivals' murderous policies.
And not everybody who lives in Da7yeh is a supporter of the Occupiers. Most live in Da7yeh for the simple reason that the rent is cheaper.

funny how no such plan was made when antisyrian politicians and journalists were killed.. double standards? LOL