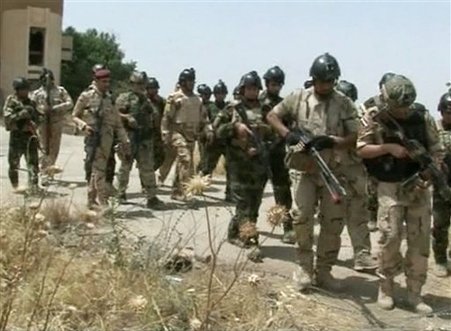 Jihadists overran Iraq's second city of Mosul, the surrounding Nineveh province, parts of Kirkuk and areas in Salaheddin on Tuesday, in a major blow to a government apparently incapable of stopping militant advances.

Prime Minister Nuri al-Maliki responded by asking parliament to declare a state of emergency and announcing the government would arm citizens to fight the militants.

"All of Nineveh province fell into the hands of militants," parliament speaker Osama al-Nujaifi told journalists in Baghdad, adding the gunmen were heading south towards neighboring Salaheddin province.

An army brigadier general told Agence France Presse hundreds of militants from the Islamic State of Iraq and the Levant (ISIL) launched a major assault on the security forces late on Monday.

An interior ministry official said Mosul, the scene of deadly clashes on Friday and Saturday, was "outside the control of the state and at the mercy of the militants".

Soldiers and police had stripped off their uniforms and fled, and the militants used loudspeakers to declare they had "come to liberate" the city of some two million people.

An AFP journalist, himself fleeing with his family, said shops were closed, a police station had been set ablaze and security forces vehicles had been burned or abandoned.

Hundreds of families were seen fleeing. Some were on foot, carrying what they could, others in vehicles with their belongings piled on the roofs.

In the Kurdish north, another AFP journalist said thousands of Mosul residents had fled for the safety of the autonomous region.

Dozens of cars and trucks stretched out from one checkpoint on the boundary of the region, as people with plastic bags, suitcases and a pram waited to enter, some with young children in tow.

"The army forces threw away their weapons and changed their clothes and left their vehicles and left the city," said Mahmoud Nuri, a displaced Mosul resident.

"We didn't see anyone fire a shot".

The assailants seized the provincial government headquarters and the Nineveh Operations Command as well as the airport, the army general said.

They also freed hundreds of prisoners from three jails.

The Turkish consulate in Mosul said ISIL fighters had captured 28 Turkish truck drivers, while a foreign ministry official said Ankara hoped they would be released once they finished unloading fuel oil at a power station.

Maliki said the cabinet had decided to arm citizens to fight the militants.

It has "created a special crisis cell to follow up on the process of volunteering and equipping and arming", he said in televised remarks.

Maliki said the cabinet also decided to reorganize the security forces, and to ask parliament to impose emergency rule.

State television said parliament had received a joint request from Maliki and the president's office to declare a state of emergency.

The militants moved into Salaheddin's Siniyah and Sulaiman Bek, both located north of Baghdad, after security forces withdrew, an army brigadier general and a local official said.

Predominantly Sunni Muslim Nineveh province has long been a militant stronghold and one of the most dangerous areas of Iraq.

ISIL, the most powerful militant group in Iraq, is also a key force in the rebellion against President Bashar Assad in neighboring Syria.

In April, it launched a campaign in Syria's Deir Ezzor province, which borders Nineveh, aimed at carving out an Islamic state.

The group said it was behind operations in Nineveh in messages on Twitter, though other militants may have been involved as well.

Mosul is the second city to fall from government control this year. Anti-government fighters also control Fallujah, west of Baghdad.

Taha said security forces abandoned their posts in one of the areas, while a local official said soldiers were ordered to depart another, allowing militants to move in.

In Baquba, north of Baghdad, two bombs killed 20 people near a funeral procession for a slain teacher.

And in the capital, nine people died in attacks.

Gunmen have launched major operations in Nineveh, Salaheddin, Anbar, Diyala and Baghdad provinces since Thursday, killing scores and highlighting both their long reach and the weakness of security forces.

Violence is running at its highest levels since 2006-2007, when tens of thousands were killed in clashes between Iraq's Shiite majority and Sunni Arab minority.

But analysts say widespread Sunni Arab anger with the Shiite-led government has also been a major factor.

veritas1 is a bit confused. France is probably perfectly aware that the Gulf monarchs, such as the Saudi "king", are financing both the insurgency in Syria and these fighters in Iraq. When veritas1 probably saw reports of such groups as ISIS fighting other insurgents in Syria, it was easy, if you didn't really follow the issue, to think the ISIS, etc., were allied with Assad. As bigjohn says, that's the last thing Assad would do.

ave you heard of blowback! Ask the US, KSA and Bashar about it. Unintended consequences always happen when you play with fire.

BigJohn - Have you heard of blowback! Ask the US, KSA and Bashar about it.

Do you realize how dumb that comment was? You just contradicted yourself.

ISIS fights for themselves, they are experienced fighters, and the Resistance has even encountered some in Syria. They are much more powerful than Al Nusra front.

@Terrorist...Lmfaoooooo Hi dumb dumb your name says it all! Have a nice day Takfiri Einstein :)

Made in the USA .