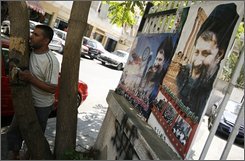 The sources, who had collaborated with the Shah’s regime, told an Iranian website that al-Sadr and his two companions Sheikh Mohammed Yacoub and journalist Abbas Badreddine were killed upon their abduction by the Gadhafi regime and their bodies were thrown into the sea after being attached to cement blocks.

Former Egyptian President Anwar al-Sadat has reportedly confirmed that the Egyptian intelligence had information that Sadr was murdered.

Western sources also said the Gadhafi regime assassinated the group that killed the Imam and his companions by blowing up the helicopter that had thrown the bodies into the sea.

In 1978, al-Sadr and his companions flew to Tripoli for a week of talks with Libyan officials. They were never seen or heard from again. The day he was last seen, on Aug. 31, 1978, is still marked annually in Lebanon.

At the time, the Libyan regime insisted al-Sadr and his aides left on a flight to Rome at the end of their visit and suggested the imam fell victim to an inter-Shiite power struggle.

The source of the report is "Iranian security forces"??? Obviously this is a bogus report.

Why is this information only being revealed now, 30 years later?

Sadr was a moderate, and popular leader in the Shiite community. Who stood to gain from his death?

Qaddafi may have killed him, but he was only carrying out the hit that was ordered by someone else.

who you thinking Small.Axe? Basij?

now we need a turbanish fatwa not to take any omega 3,or eat fish.

@small.axe: sadr was abducted in 1978, the Islamic revolution in Iran prevailed in 1979, if you're hitting out at Iran, that’s mean u r hitting “Shah” regime, right?

I'm not hinting at anyone, I'm just saying this report is bogus. You have to ask, who stood to gain from his death? Why is this report only coming out now, 30 years later? Qaddafi is the leading suspect, but most likely he wouldn't have made the decision on his own.

If I was forced to list suspects, I would have to consider the following, in random order as partners with Qaddafi:

Also, hopefully not true, but who succeeded Sadr as leader of Amal?

Khomeini is the one who gained from his death, Musa Sadr was the most respected shia imam of all, he was strong, he was smart, and had many followers. He gathered the shias in lebanon and being part iranian part arab he would be the perfect shia leader. So what did Khomeini do? he ordered him dead so that He could be the new leader and not Musa Sadr, after all Musa Sadr didnt even approve khomeini as an ayatollah. Musa Sadr was a great man, why do you think that the shah never did anything to harm Musa Sadr but exiled khomeini?

Btw I am from Iran, I am a shia muslim my self, I love Lebanon but this is really what I believe

Apparently, there was a heated argument between Sadr and Qaddafi and the latter asked his guards to take them all away . . . . . and that was the end of what is known! Mr. Sadr was trying to convince Qaddafi to stop pouring money and weapons to various factions in Lebanon so that Lebanese have a chance at resolving their problems off the streets . . . .

Benzona and m g are reflecting juvenile behavior ..that is not funny mr lsm
mrBrain

What about the hundres in syrian jails?
Waynak ya batal ya Sleiman?

m.seraaly
disagreements between imam sadr and khomeini about religion and politics are well known and documented

Sadr was killed for the same reason Kamal Jumblat was killed.

Ok now this mystery is solved. get on with the STL, many more loose ends to be tied.

God be with you musa sadr. Bas haram, you're successors have done a terrible job continuing your peaceful, tolerant, and holy legacy. May god bless the Shia community with another musa sadr, and ridding them of the corrupt, power hungry, atheist leaders nabih berri Hassan nasrallah nd all their cronies..the Shia deserve a looooooooot better

Musa sadr was a puppet of the syriN regime. He was never a moderate nor a hero Musa sadr, nabih berri and the entire amal terror organization are a bunch of thugs, murderers, rapists , thieves and otherwise evil criminals.

Brilliant speculations about the the reasons behind Sadr's disappearance, Le Big... brilliant. Now, can you utilize this genius of yours to connect the dots between, say, Geagea, or Harriri and global climate change? I'm all ears.