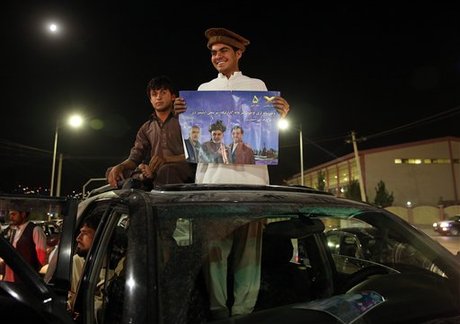 Presidential candidate Abdullah Abdullah claimed victory on Tuesday in Afghanistan's disputed election, blaming fraud for putting him behind in preliminary results as fears rise of instability and ethnic unrest.

Abdullah told a rally of thousands of rowdy supporters in Kabul he would fight on to win the presidency, but he called for patience from loyalists who demanded he declare a "parallel government" to rule the country.

"We are proud, we respect the votes of the people, we were the winner," Abdullah said. "Without any doubt or hesitation, we will not accept a fraudulent result, not today, not tomorrow, never."

Before he spoke, a huge photograph of President Hamid Karzai was ripped down from the stage -- underlining the boiling anger among Abdullah's supporters after Monday's preliminary result in favor of poll rival Ashraf Ghani.

The election stand-off has sparked concern that protests could spiral into ethnic violence and even lead to a return to the fighting between warlords that ravaged Afghanistan during the 1992-1996 civil war.

Both Abdullah and Ghani called for the country to remain united as it faces a difficult transfer of power at the same time that 50,000 U.S.-led NATO troops wind down their battle against Taliban insurgents and aid money declines.

"We accept the preliminary result of the election, and I ask all my countrymen to patiently wait for the final results.

"Our votes are clean and will pass any auditing."

President Karzai, the United Nations and the United States all called for candidates to respect the election timetable, which allows for auditing and complaints before the official result is released on about July 24.

"The results are not final and are subject to change, and... it would be premature for either of the candidates to claim victory," the U.N. mission in Afghanistan said, in an apparent criticism of Abdullah.

The mission urged both campaigns to prevent supporters "from taking steps that could lead to civil disorder and instability."

Karzai, who is constitutionally barred from a third term in office, has stayed publicly neutral in the lengthy election, but Abdullah supporters accuse him of fixing the run-off vote in Ghani's favor.

The president, who came to power after the fall of the Taliban in 2001, welcomed the result announcements, but said the winner would be known only "after complaints are addressed and genuine votes separated".

Independent Election Commission head Ahmad Yusuf Nuristani admitted on Monday there had been fraud by the security forces and senior government officials.

Before Monday's result, the two rival teams were in intense negotiations over the extent of a proposed fraud probe to check thousands of the most suspicious ballot boxes.

Earlier, the United States issued a strong warning over reports that Abdullah would form a "parallel government" in defiance of the results -- which said Ghani took 56.4 percent of the vote to Abdullah's 43.5 percent.

"The United States expects Afghan electoral institutions to conduct a full and thorough review of all reasonable allegations of irregularities," U.S. Secretary of State John Kerry said in a statement from Washington.

"Any action to take power by extra-legal means will cost Afghanistan the financial and security support of the United States and the international community."

Abdullah, a former anti-Taliban resistance fighter, said Kerry would visit Kabul on Friday in a bid to help solve the crisis.

NATO's chief Anders Fogh Rasmussen said the allegations of poll fraud were a "grave concern", and that he hoped a credible outcome could be reached in order to allow the new Afghan president to sign a security pact before a NATO summit in September as international forces wind down their Afghan mission.

The insurgents, who see the election as a U.S. plot to control Afghanistan, killed 16 people, including four Czech soldiers, in a suicide bombing north of Kabul on Tuesday.

Afghanistan's international backers have lobbied hard to try to ensure a smooth election process, but the contested outcome realized their worst fears and risks setting back gains made since the Taliban fell.

Abdullah's supporters took the street 10 days ago when reports emerged that Ghani was well ahead in the vote count, though protests have so far been peaceful.

Ghani attracts much of his support from the Pashtun tribes of the south and east, while Abdullah's vote base is among the Tajiks and other northern Afghan groups -- echoing the ethnic divisions of the civil war.

Karzai is due to hand over power at an inauguration ceremony on August 2.