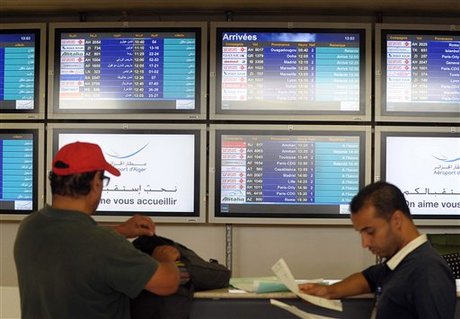 An Air Algerie plane missing since early Thursday over Mali with 116 passengers and crew, including some 50 French nationals, on board probably crashed, French President Francois Hollande said.

Speaking on French television, Hollande said: "Everything leads us to believe that the plane has crashed."

He said the plane's Spanish crew had signaled they were altering course "due to particularly difficult weather conditions."

He vowed to deploy all of France's military means in Mali, where it has hundreds of troops, to track down the wreckage of the missing plane.

Meanwhile, a coordinator for the crisis unit in Ouagadougou said the wreck of the plane has been found in Mali near the Burkina Faso border.

"We have found the Algerian plane. The wreck has been located ... 50 kilometers north of the Burkina Faso border" in the Malian region of Gossi, said General Gilbert Diendiere from the Burkina Faso army.

Flight AH5017, which originated in Ouagadougou and was bound for Algiers, went missing amid reports of heavy storms, company sources and officials said.

"Contact was lost with the McDonnell Douglas 83 at 1:47, a little after the pilots said they were diverting from the route due to meteorological reasons," French Foreign Minister Laurent Fabius said.

Algerian Prime Minister Abdelmalek Sellal was earlier cited as saying by Algerian radio that the plane dropped off the radar at Gao, 500 kilometers (300 miles) from the Algerian border.

Fabius said there were 51 French on board.

Four countries were taking part in the search for the Air Algerie plane.

Mali, Algeria, Niger and France were coordinating their efforts under the umbrella of the French-led military intervention in Mali, Operation Serval.

"Even though the aircraft was above Mali it was in airspace managed by the control center in Niamey in Niger," an air traffic control official told Agence France-Presse.

A witness later reported seeing the plane "falling" in the region of Gossi, in northern Mali, the head of the emergency investigation into the flight said.

"A witness informed us they had seen the plane falling at 0150 (GMT and local time Thursday)," said General Gilbert Diendiere, coordinator of the crisis unit in Ouagadougou.

"We believe this information is accurate as we have compared it to radar images showing the flight path until the plane disappeared," Diendiere said.

The witness had indicated the plane may have crashed 80 kilometers (50 miles) southeast of the town of Gossi, "and that is where we will strengthen our search", Diendiere added.

Its six-member crew were all Spanish, said Spain's airline pilots' union Sepla, and Swiftair confirmed the aircraft went missing less than an hour after takeoff.

The plane had apparently been given the "all clear" following an inspection in France only this week, the French civil aviation authority DGAC said.

In France, two crisis units had been set up, at the DGAC and at the foreign ministry, DGAC said, in addition to another two at Roissy-Charles-de-Gaulle airport in Paris and at Marseille airport.

DGAC said that many passengers had been due to catch onward connecting flights to Paris and Marseille.

In Mali, the prime minister's office also said contact was lost around Gao.

"The plane was not far from the Algerian frontier when the crew was asked to make a detour because of poor visibility and to prevent the risk of collision with another aircraft on the Algiers-Bamako route," an airline source said.

A controller in Mali, also speaking on condition of anonymity, said the area was rocked by "strong storms" overnight.

Air Algerie, in a statement carried by national news agency APS, said it had initiated an "emergency plan" in the search for AH5017, which flies the four-hour passenger route four times a week.

The search comes less than six months after one of Algeria's worst air disasters.

In February, a C-130 military aircraft carrying 78 people crashed in poor weather in the mountainous northeast, killing more than 70 people.

The plane had been flying from the desert garrison town of Tamanrasset in Algeria's deep south to Constantine, 320 kilometers (200 miles) east of Algiers.

Tamanrasset was the site of the country's worst-ever civilian air disaster, in March 2003.

In that accident, all but one of the 103 people on board were killed when an Air Algerie Boeing 737-200 crashed on takeoff after one of its engines caught fire.

The sole survivor, a young Algerian soldier, was critically injured.

In 1952, it took a fellow named Clessie Cummins, a driver like Fred Agabashian and
the amazing Kurtis-built number 28 Cummins Diesel Special Indy car.
This result is less wear and tear per hour or mile.

You will find street vendors and beggars at many of the intersections.