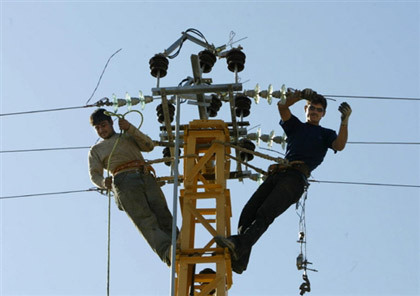 Electricite du Liban contract workers marched on Tuesday from the company's headquarters in Beirut to the Energy Ministry where they held a protest to demand the full-time employment of all workers and announced they would go on an open-ended strike.

The protesters urged politicians to fulfill their promises and described a memo handed by the EDL management to the energy ministry as a “massacre” against the workers.

They briefly blocked the Emile Lahoud highway where the ministry is located and a five-member committee held talks with Energy Minister Arthur Nazarian.

But the workers later announced the failure of the talks, saying they would go on an open-ended strike and erect tents at the company's HQ in Beirut's Mar Mikhael district.

Their warning was followed by the closure of the highway with burning tires.

Parliament adopted a law in April under which all workers would undergo an exam to fill vacant posts. Those who pass would be upgraded.

But EDL said it limited the number of workers who would become full-timers to around 891.

The state-run firm decided to send 1,600 of them home, head of EDL contract workers committee Lebnan Makhoul said on Monday.

Tuesday's protest came a day after the workers closed the doors of the company's branches across Lebanon.

Protesters burned tires outside the company's headquarters to press for their demands.

They vowed to keep holding protests until the company withdraws its decision.

Lebanon needs a proper social security program. EDL has to go back to being an electricity company.

Lebanon needs a liberal non sectarian system where services are not provided based on nepotism and clientelism
as fro the workers, im sure "el harake" can find something suitable
enough is enough!