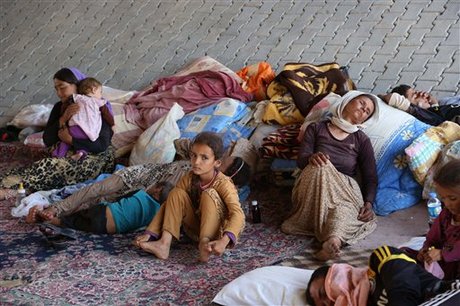 Details emerged Saturday of a "massacre" carried out by jihadists in a northern Iraq village, as world powers ramped up efforts to cut their funding, arm Kurds battling them and assist those they displaced.

Dozens of civilians were killed, most of them followers of the Yazidi faith, officials said as the Islamic State group fighters pressed their offensive against minority groups in the north.

A senior official of one of Iraq's main Kurdish parties said 81 people had lost their lives, while a Yazidi activist said the death toll could be even higher.

The village lies near the northwestern town of Sinjar, which the jihadists stormed on August 3 sending tens of thousands of civilians, many of them Yazidi Kurds, fleeing into the mountains to the its north.

They hid there for days with little food or water.

Fear of an impending genocide against the Yazidi minority, whose faith is anathema to the Sunni Muslim extremists, was one of the reasons Washington cited for air strikes it began on August 8.

U.S. President Barack Obama declared the Mount Sinjar siege over on Thursday but vulnerable civilians remain in areas taken by the jihadists, including Yazidi Kurds.

In Kocho, Zebari said the jihadists "took their revenge on its inhabitants, who happened to be mostly Yazidis who did not flee their homes."

Human rights groups and residents say IS fighters have demanded that villagers in the Sinjar area convert or leave, unleashing violent reprisals on any who refused.

Mohsen Tawwal, a Yazidi fighter, said he saw a large number of bodies in Kocho.

"We made it into a part of Kocho village, where residents were under siege, but we were too late," he told AFP by telephone.

"There were corpses everywhere. We only managed to get two people out alive. The rest had all been killed."

A Kurdish official said the militants had taken the village's women to prisons they control.

The Pentagon announced that U.S. drones had struck an IS convoy leaving the village on Friday after receiving reports that residents were under attack.

The outcome of the latest U.S. strike was not immediately clear.

Amnesty International, which has been documenting mass abductions in the Sinjar area, says thousands of Yazidis have been kidnapped by IS since it launched its offensive in the region on August 3.

Members of the Christian, Turkmen and other minorities have also been affected by the violence.

In New York, the UN Security Council unanimously adopted a resolution aimed at weakening the jihadists, who control large areas of neighbouring Syria as well as of Iraq.

The resolution "calls on all member states to take national measures to suppress the flow of foreign terrorist fighters" and threatens sanctions against anyone involved in their recruitment.

And EU ministers agreed at an emergency meeting in Brussels to back weapons deliveries to Iraqi Kurdish fighters who have been battling to halt the advance of the well-armed jihadists.

When jihadist forces began their Iraq offensive on June 9, Kurdish peshmerga forces initially fared better than retreating federal soldiers, but the U.S.-made weaponry abandoned by government troops turned IS into an even more formidable foe.

They were able to sweep through the Sunni Arab heartland north and west of Baghdad in early June, encountering little effective resistance.

Many in and outside Iraq say the Shiite-led government was partly to blame by pushing sectarian policies that have marginalised and radicalised the Sunni minority.

Outgoing premier Nuri al-Maliki was seen as an obstacle to any progress and his announcement on Thursday that he was abandoning his efforts to cling to power was welcomed with a sigh of relief at home and abroad.

In another potentially game-changing development, 25 Sunni tribes in the western province of Anbar, including some that had previously been on the fence, announced on Friday that they were launching a coordinated effort to oust IS fighters.

"This popular revolution was agreed on with all the tribes that want to fight IS, which spilled our blood," one of their leaders, Sheikh Abduljabbar Abu Risha, told AFP.

Anbar was the birthplace of the Sahwa, or Awakening, movement of Sunni tribes that from late 2006 sided with U.S. forces against their co-religionists in Al-Qaeda, helping turn the tide of that Sunni insurgency.