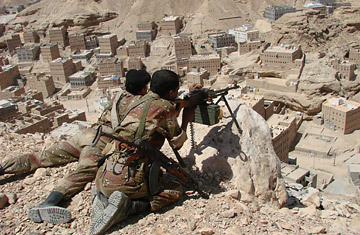 Six suspected al-Qaida militants and three Yemeni troops died in clashes Sunday in the southeastern province of Hadramawt, scene of many recent attacks on the army, a local official said.

"At dawn, armed forces bombarded a house where al-Qaida fighters had barricaded themselves in, killing three of them and wounding others," the official told AFP on condition of anonymity.

The body of a fourth militant was later found in the house in the Hadramawt town of Qatan, along with four people who were arrested, a military source said.

He said the people arrested were two men -- a Yemeni and a Somali -- and two women, a Pakistani and a Filipina.

Responding to the army's action, other militants arrived from nearby and attacked an army position in Qatan, sparking a shootout, the local official said.

"Three soldiers were killed and six wounded during four hours of fighting," the official said, adding: "Two of the attackers died and four were wounded."

Weapons of various calibre were used in the skirmish and several nearby homes were damaged, witnesses said.

On Thursday a policeman and two militants died in clashes in Mukalla, capital of Hadramawt.

Authorities in the city said they had prevented three suicide car bomb attacks against an official residence, a police barracks and another police site.

The defense ministry said it had "thwarted a dangerous criminal plan by al-Qaida" in Mukalla.

To deal with the growing number of attacks attributed to Qaida-linked militants, the army has stepped up its presence with a view to launching an offensive against the extremists.

Al-Qaida in the Arabian Peninsula, considered by Washington as the most dangerous affiliate of the jihadist network, is active across several parts of Yemen, taking advantage of a collapse of central authority during a 2011 uprising that ousted veteran president Ali Abdullah Saleh.