Pope 'Available' to Go to Iraq 'if Necessary' 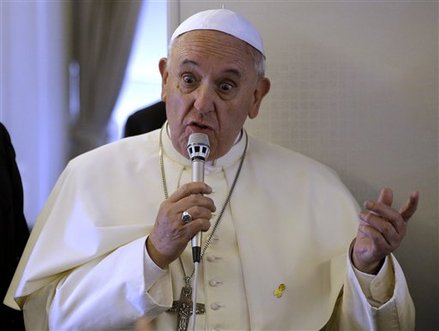 Pope Francis said on Monday that he was "available" to go to Iraq to provide support for refugees and Christian groups in Kurdistan "if necessary".

Speaking on board the plane which brought him back from his trip to South Korea, the pope said that proposals considered by the Vatican to help people threatened by jihadists in northern Iraq included the pontiff travelling to the region.

"We said, if necessary, when we return from Korea we can go there, but right now it is not the best thing to do," he told reporters.

Pope Francis also called for collective action through the United Nations to "stop unjust aggression" in Iraq, in an implicit criticism of unilateral U.S. air strikes against Islamic militants there.

Asked about recent U.S. strikes against Islamic State targets in northern Iraq, the pope said that "in the case where there is unjust aggression, it is acceptable to stop an unjust aggressor. I emphasize the word 'stop'. I am not saying 'bombard' or 'make war upon'."

"One nation cannot decide" alone how to end the aggression, the pontiff, speaking aboard the flight bringing him back from a trip to South Korea, added.

"The idea of the United Nations came after the Second World War. That is where we should be having the discussion and saying, 'there is an unjust aggressor. How are we going to stop it?'"

Last week, after thousands of Iraqi Christians had fled attacks by Islamic State jihadists in the north, Francis made a plea to the U.N. to do all it can to stop the violence.

Francis told reporters on Monday he was glad to be able to clarify his position on the right to a legitimate defense in the face of the risk of genocide.

Church figures on the ground in Iraq, where the Islamic State and other militant groups are carrying out a brutal offensive, have warned that Christian persecution may be becoming a genocide.