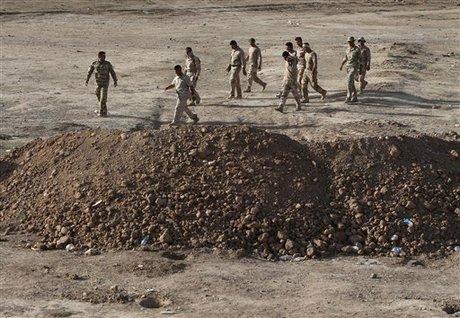 Iraqi forces battled Sunni militants along a string of fronts on Tuesday, including at Saddam Hussein's hometown Tikrit, as the United Nations readied a massive aid operation for displaced Iraqis.

Other security forces backed by militiamen and tribesmen are also fighting jihadists in flashpoints north, west and south of Baghdad, officials said.

The counter-offensives against the militants came as the U.N. refugee agency said it was launching a major operation this week to help "close to half a million people" who have been displaced.

U.S. President Barack Obama hailed the recapture of the Mosul Dam but warned Baghdad that "the wolf is at the door" and said it must move quickly to build an inclusive government.

The dam was the biggest prize yet clawed back from the Islamic State (IS) jihadist group since it launched a major offensive in northern Iraq in June, sweeping aside Iraqi security forces.

"This operation demonstrates that Iraqi and Kurdish forces are capable of working together and taking the fight to (IS)," said Obama.

"If they continue to do so, they will have the strong support of the United States of America," he promised, in his clearest signal yet that the 10-day-old U.S. air campaign was far from over.

U.S. and other officials have repeatedly stressed that military cooperation between the Kurds and Baghdad was key to any successful counter-offensive, but their alliance remains uneasy.

"We are the ones who liberated the dam, not the peshmerga," said one of several members of the federal special forces who climbed on top of two vehicles to shout at journalists gathered at a Kurdish checkpoint.

Fighting erupted Tuesday in the area surrounding the dam and U.S. warplanes carried out fresh strikes targeting IS, a senior officer in the Kurdish peshmerga forces told Agence France Presse.

U.S. experts have warned a breach of the dam could result in a flood wave 20 meters (yards) tall at the city of Mosul to its south and cause flooding along the Tigris River all the way down to Baghdad.

As anti-jihadist forces tried to reclaim ground lost earlier this month in the north, the government launched an operation to recapture the city of Tikrit, further south.

"The Iraqi army and (Shiite) volunteers, backed by Iraqi helicopters, are taking part" in the operation to retake the hometown of executed former president Saddam Hussein, a high-ranking army officer told AFP.

Tikrit fell on June 11 and has since been controlled mostly by Sunni militant groups, including former members of Saddam's ruling Baath party.

The government, whose forces folded when jihadist-led militants swept across five provinces more than two months ago, has made Tikrit a priority but has already failed twice to retake it.

U.S. military aircraft have carried out 35 air strikes against IS militants in Iraq over three days, destroying more than 90 targets, the Pentagon said.

Obama justified the strikes, the first U.S. military intervention since troops withdrew in 2011, with the risk of genocide against the Yazidi minority and a threat to U.S. personnel in the Kurdish capital of Arbil.

Washington has so far resisted growing calls in and outside Iraq to expand its air strikes beyond targets in the north.

Two months of violence have brought Iraq to the brink of breakup, and world powers are relieved by the departure of divisive premier Nuri al-Maliki, who stepped down last week, hoping his successor will be a unifying figure.

In the north, members of minority groups including Christians, Yazidis, Shabak and Turkmen, remain under threat of kidnap or death at the hands of the jihadists, while tens of thousands of others have fled, prompting the U.N. to announce the major aid operation.

Meanwhile, IS supporters launched their latest social media effort, starting the hashtag "#AmessagefromISIStoUS" to mark posts on microblogging site Twitter, threatening the United States with remarks such as: "We will drown all of you in blood."

It was hijacked by American users who retorted with jingoistic rhetoric, including one user who posted a picture of a drone firing missiles along with the message: "This drone is for you".

IS also warned that the U.S. "will soon disappear... at the hands of the knights of the Caliphate."

The jihadists, who declared their "caliphate" over a vast region straddling the Iraq-Syria border, have also came under attack in their Syrian stronghold of Raqa by Syria's air force.

NOOOOOO dont do that!!!! you will upset the takfiris and invite them to iraq!!!!
follow the wisdom of the great emir hariri, and his imam dajaja: just cower and shine their shoes and keep your head in the sand until they're gone.

Has it not been for the power of Iran and the resistance those Takfiris would have taken over all of Iraq. But Iran's bombing has pulled the carpet from underneath them and debilitated them.

yes, isis got a lot of local support in the areas they took, and this is why they managed to take them easily.
but this is not the whole picture, FT is right:
http://www.dailystar.com.lb/News/Middle-East/2014/Aug-15/267383-iraq-sunni-tribes-take-up-arms-against-jihadists.ashx

yes, and so?
not clear what you're trying to debate here. no matter the reason, the simple point FT was making remains:
Real Sunnis rose against the ISIS terrorists.

Just hoping to see more of that in Syria and elsewhere, ISIS is everybody's enemy (except israel's)

oh, i see what you're trying to say, the "BIG" "super important" point you absolutely had to make in an unrelated discussion:
that iran is oh-so-evil and the US are the big saviors of the world.
god bless america and their bombs who destroyed iraq, their policies and occupation that split it into confessional factions, their CIA that created baghadadi, their blessed takfiri warriors who just gave them the pretext for fulfilling the long-standing goal of de facto partition of Iraq

oh and btw, they achieved nothing by pushing maliki out. abadi is even more pro-iranian than him.

and ps: "US offerred the solution against ISIS in Irak early June" ?!?! i really dont see what you're referring to. can you develop on that?