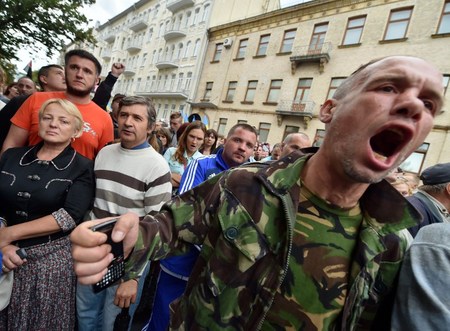 A leading volunteer commander in Ukraine triggered protests against the government on Wednesday after a series of angry Facebook messages over the failure to support troops besieged by rebels and rapidly running out of ammunition.

Pro-Russian rebels have surrounded the town of Ilovaysk, a railway hub 10 kilometers (six miles) east of their main stronghold of Donetsk.

Several government contingents are low on supplies and unable to evacuate the injured, according to commanders on the ground.

Semen Semenchenko, head of the "Donbass battalion" which was the first to be formed completely from volunteers to fight in the east, has posted a series of social media messages in recent days, denouncing government inaction and calling for protests.

Hundreds heeded his call on Wednesday to demonstrate outside the office of President Petro Poroshenko in Kiev.

"There will not be help today, and the defense minister and the commander of the (operation in the east) are the ones responsible." Semenchenko said in his latest message.

Protesters outside Poroshenko's office held signs saying "President, save our patriots" and "Out with traitor generals".

"Eight days our guys are asking for help... we are seeing only inaction," said Natalia Golubtsova, a pensioner who joined the protest.

"It seems as if they've been sent to the slaughter."

Russia has denied that its forces are engaged in Ukraine but Western intelligence reports have claimed they are present in the country.

"My friend is over there, he is in Ilovaysk, he fights for Donbass, and he has five children," said Anton, a 25-year-old protester.

"They have 11 wounded men that need to be taken out, and our general staff is not lifting a finger."