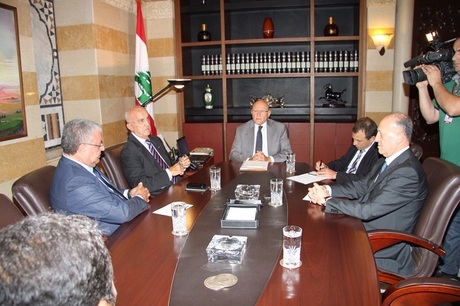 A ministerial panel following up on the case of the abducted troops convened on Friday amid a boycott by the hostages' families, as the Islamic State group accused Qatari mediators of maneuvering and “obstructing the negotiations” before eventually meeting with them.

“Prime Minister (Tammam) Salam expressed his relief over the political consensus that was demonstrated during the (Thursday) cabinet session regarding the principles that must govern the issue,” Defense Minister Samir Moqbel told reporters after the meeting.

“The importance and sensitivity of the issue necessitate the agreement of all national components over a clear stance that prevents the surfacing of any internal cracks that might stir confusion or domestic strife, which is the kidnappers' first and last goal,” Moqbel quoted Salam as saying.

“Salam stressed that the issue of abductees is a cause that concerns all the Lebanese and that it is the main concern of the government. It is being dealt with as a national cause that has the priority over all other issues," Moqbel added.

The conferees also expressed their "solidarity with the families of the missing troops," underlining "the need to deal with this tragic problem with a lot of patience and wisdom and away from tension and agitation.”

Moqbel said the panel members “were briefed on the latest developments in the case and the efforts that are being exerted on several fronts," noting that "the appropriate decisions were taken."

Responding to a reporter's question, the minister said "the taken decisions do not involve any (prisoner) exchange but rather an attempt to hold negotiations at the level of states, not individuals."

Earlier on Friday, the so-called Qalamun branch of the Islamic State said in a statement: “After having agreed to hold indirect negotiations with the Lebanese government ... (the IS) was surprised that the Qatari side … is procrastinating in the issue of meeting the IS' negotiators.”

The group held the Qatari delegation directly responsible for “obstructing the negotiations and for the lives of the troops.”

However, the IS later issued a statement confirming that it did meet with Qatari mediators and that "other parties" were obstructing the talks.

The group also announced that the Qatari delegation will be "the only channel of negotiations" and that it handed it a list containing its demands.

The delegation had arrived overnight Thursday in Lebanon before immediately heading to the Bekaa town of Arsal, which borders Syria.

“A Syrian figure delegated by the Qataris met with Abou Malek al-Talli, al-Nusra Front's emir (in Syria's Qalamun), and discussed with him the issue of the captive security personnel,” LBCI TV reported earlier in the day.

Meanwhile, Foreign Minister Jebran Bassil stressed as he entered the panel's meeting that only states, not individuals or groups, must be involved in negotiations to free the abducted troops.

Justice Minister Ashraf Rifi for his part said “things are going in a positive direction and Prime Minister Tammam Salam is communicating with the Qatari mediators regarding the abducted troops.”

Responding to the statement issued by the IS, Interior Minister Nouhad al-Mashnouq said “if Qatar is negotiating, then it is performing an act that benefits Lebanon.”

The meeting was held amid a boycott by the families of the captive security personnel, who have accused Lebanese authorities of “negligence” regarding the case of their sons.

The families had on Thursday called on Army Commander General Jean Qahwaji to “arrest all ministers and swap them for the abductees.”

Around 36 Lebanese soldiers and policemen were taken hostage last month after IS and Nusra gunmen overran Arsal during deadly battles with the Lebanese army.

Lebanon has been reportedly seeking the help of Qatar and Turkey to ensure their safe release.

The militants have released several hostages in different stages but they have also beheaded Lebanese army sergeant Ali al-Sayyed.

The jihadists have reportedly called on the Lebanese government to release Islamist inmates from the country's largest prison in Roumieh in exchange for the captive security personnel.

Only a few of the estimated 90 Islamists have been tried. Most of them were arrested over their involvement in bloody clashes with the Lebanese army at the northern refugee camp of Nahr al-Bared in 2007.

The fighting in Arsal was the most serious border incident since the conflict in Syria began in March 2011.

I doubt Lebanon is seeking the help of Qatar and Turkey, but rather demanding these countries exert pressure on their little puppets the isil to release the lebanese soldiers.

2 minutes ago FPM official Salim Jreissati to VDL (93.3): We should cooperate with the Syrian government and coordinate the field operations.

flamethrower I want us to coordinate our breaks so we can post at the same time.

Does Naharnet have a direct line with Qatar, why was FT post removed.

I almost shed a tear.... almost

remember the release of the nuns , and the a3zaz kidnaped , and the 2 moutrans which we never hear about them ,...and now our LAF they were abducted by factions funded by saudies and qataries and facilitated by turkey
the best way to release our soldiers we have 1.5 million Syrians if they slaughter 1 soldier we should kill 100000 Syrian its the only language these thugs terrorists and their masters understand

cityboy, you and I always have the same thoughts on every thing. Sometimes I feel we are the same person with 2 different screen names

hmm i was thinking the same thing. You and I always think the same

4 hours ago The Ouzai highway was reopened after residents blocked it to protest the power outage in the area.

haha! you keep uncovering them one by one..Well done flamethrower!

It is ok for the Islamic republic of Iran to send money and arms to Hezbollah but it is not ok for any other country such as Qatar or any others to send support to HA counterpart.
At what point, the human being learns that there are two way street.
Both side are militias and have long list of terrorist deeds throughout long years.

Yeah flamer, let's cooperate with the Syrian government. It's such a great idea, I mean they're only bombing Arsal, Wadi Khaled, and other areas in Beqaa. As long as they're eradicating the takfiri scum and foiling the US-Israeli-KSA agenda then it's okay for Bashar to bomb us because they're helping the resistance.

Qtar is learning from Iran who did and still do the same thing. May God rid Lebanon from both so we can prosper and have a civilized life again.