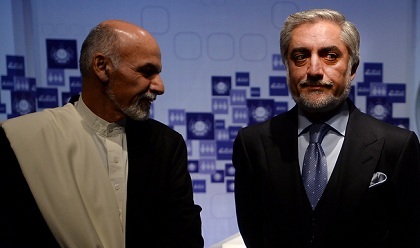 Afghanistan's disputed presidential election inched towards a possible conclusion Monday with a senior government official hailing a "breakthrough" in talks between the two candidates, who both claim to have won the vote.

Ashraf Ghani and Abdullah Abdullah have been wrangled over a power-sharing deal after the June 14 election was engulfed in allegations of massive fraud that have threatened to spark instability as NATO troops pull out of the country.

"This is a breakthrough, there has been progress luckily," Aimal Faizi, spokesman for outgoing President Hamid Karzai, told AFP after negotiations between the rivals on Monday.

"Soon they will put all these points in a document that will be signed in the presence of the president and other prominent Afghan figures," he said.

Ghani, who is widely tipped to emerge as president, won the run-off election according to preliminary results, but Abdullah has consistently said he was the victim of state-backed ballot-rigging.

Faizi declined to give details of the agreement, which both campaign teams have previously said would hinge on the power held by a new chief executive officer (CEO), who would be nominated by the election loser.

"From our understanding, there isn’t any issues left (undecided), but the campaigns will have to answer details on that," Faizi said.

The stand-off has threatened to wreck hopes that the billion-dollar U.S.-led military and civilian aid effort since the fall of the Taliban regime in 2001 would leave Afghanistan as a democratic country.