IS Jihadists Down Syria Warplane over Stronghold 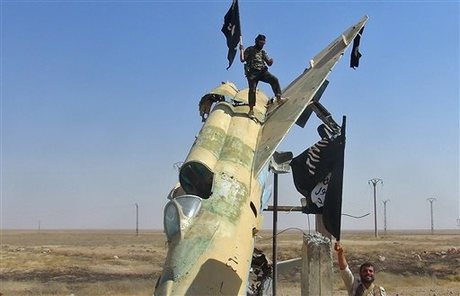 "IS fighters fired on a military aircraft which crashed," the Britain-based group said.

"It is the first aircraft shot down since the regime launched air strikes against the jihadists in July following their declaration of a caliphate in late June," said the group, which relies on a wide network of doctors and activists for its reports.

Observatory director Rami Abdel Rahman told Agence France Presse that the plane was carrying out strikes on the IS stronghold of Raqa when it was hit.

It crashed into a house in the Euphrates Valley city, the sole provincial capital entirely out of Syrian government control, causing deaths and injuries on the ground, he added.

A photograph posted on a jihadist Twitter account purported to show the burnt-out wreckage of the plane.

"Allahu Akbar (God is greater), thanks to God we can confirm that a military aircraft has been shot down over Raqa," another account said, congratulating the "lions of the Islamic State."

The plane is far from the first Syrian government aircraft downed by opposition forces, but it comes after President Bashar al-Assad's regime stepped up its air campaign against IS in eastern Syria.

In recent weeks it has repeatedly targeted the group's Euphrates valley strongholds in Raqa and Deir Ezzor provinces and jihadist-held areas of the northeastern province of Hasakeh.

An air strike on an IS training camp in the Deir Ezzor town of Tibni killed 17 militants and a child on Saturday.

U.S. President Barack Obama announced last week he had authorized the expansion to Syria of the air campaign against IS that he launched in neighboring Iraq in early August.

There have been no U.S. strikes in Syria so far but Obama's announcement, which was made in defiance of the Syrian government, drew protests from Damascus and its Iranian and Russian allies.

Elsewhere in Syria on Tuesday, the Observatory said at least two members of regime forces were killed in clashes with rebels including al-Qaida affiliate Al-Nusra Front in Damascus province.

The fighting in Dakhaniya, near the eastern outskirts of Damascus, also killed 12 opposition fighters overnight, the Observatory said.

Rebel forces seized the area near Jobar in east Damascus and adjacent to the opposition stronghold of Eastern Ghouta last week and regime forces are fighting to reclaim it.

In the capital, meanwhile, the Observatory said the toll in a failed rebel attempt to infiltrate a district of the Old City had risen to 11 opposition fighters killed.

They were killed in clashes after they entered the Midan neighborhood through a sewer in the early hours of Monday, security sources said.

After fierce fighting in the capital in 2012, regime forces expelled rebel fighters from the heart of the city, but they remain in several strongholds on its outskirts.

your iq lebjack is lower than bearable...how this plane could have been targeted and crashed ? please tell me dr ...as it is still full !!! just propaganda at the moment where they are loosing ground...try again next time (-:

your iq lebjack is lower than bearable...how this plane could have been targeted and crashed ? please tell me dr ...as it is still full !!! just propaganda at the moment where they are losing ground...try again next time (-:

What do you mean CFTC? I've often seen jet plans crash into the ground where they get stuck in the sand completely in tact, like it crashed at 10km/hr. the plane was so well built, that the pilot was even able to climb out of the cockpit! LOL