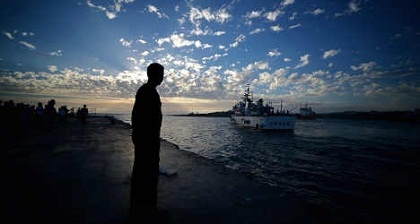 Egypt on Wednesday blamed organized criminal gangs of people traffickers operating on its territory after a boat carrying 500 illegal migrants was intentionally capsized off Malta.

The migrants, including up to 100 children, drowned after smugglers sank their ship when the passengers refused to change to a smaller vessel, survivors said.

"There is a Mafia of smugglers that work on smuggling illegal immigrants to Italy," interior ministry spokesman Hany Abdel Latif told AFP when asked about accusations that Egyptian smugglers were behind last week's shipwreck, the deadliest in Europe in years.

In the incident off Malta, just 10 people survived and some of them told the International Organization of Migration (IOM) that their boat had been intentionally sunk by a group of 10 smugglers said to be Palestinians and Egyptians.

The migrants, many of whom were Syrian, Palestinian, Egyptian and Sudanese, had set out from the Mediterranean city of Damietta in Egypt on September 6.

Abdel Latif said that migrants were entering Egypt under false pretenses before trying to travel on to Europe.

"Those Syrians and Palestinians enter Egypt with tourist visas, then attempt to get smuggled to Italy," he said.

According to U.N. refugee agency UNHCR, more than 2,500 people have drowned or gone missing attempting to cross the Mediterranean to Europe this year.