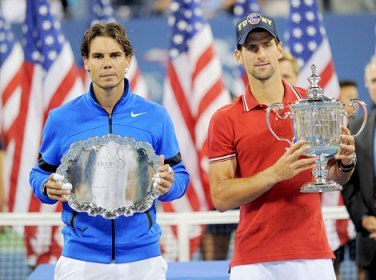 Rafael Nadal was sent reeling to another bruising defeat by Novak Djokovic on Monday, but insisted his U.S. Open disappointment had only strengthened his resolve to reassert himself against the Serb.

"I go back home knowing that I am on the way," said Nadal, who beat Djokovic in the 2010 final at Flushing Meadows to complete a career Grand Slam but has had no answer for him in Djokovic's transcendant 2011 season.

"Six straight losses, for sure that's painful," the 25-year-old Spaniard said. "But I'm going to work every day until that changes. So I have a goal, an easy goal for me now.

"It's going to be tough to change the situation, but the goal is easy to see."

One thing Nadal knows must improve is his serve, which he said wasn't up to standard on Monday.

"My serve was bad tonight, that's the truth," said Nadal, who struggled to get his first serve in play.

"My serve has to come back to another level. I don't think I need an ace or a game-winner serve, but a lot of times I started the point in a worse position than him when I was serving. That's tough."

He lost his world number one ranking to Djokovic after the Serb's triumph at Wimbledon and suffered early exits at Montreal and Cincinnati in the build-up to the final Grand Slam of the year.

At Flushing Meadows, he created a sensation when he was stricken with leg cramps at a post-match press conference and was thrust into controversy when he joined Andy Murray and Andy Roddick in protesting to organizers over being sent out to play on rain-slicked courts.

Nevertheless, Nadal said he couldn't be disappointed in a season that included a 10th Grand Slam title, even if he couldn't match his three Grand Slams of 2010.

"I am not that one that feels that reaching the final is a bad result," he said. "I don't consider myself that good. I fight to be always there.

"I appreciate the result. Final is fantastic result. Winning 10 Grand Slams -- this year I won another one, Roland Garros.

"It's smart to accept the losses with the same calm as the victories, and keep working without thinking about the past.

"I was in the final of Wimbledon, final of US Open. I go back to Spain more happy today than after the Wimbledon final, because after here I think I am on the right way to trying to beat him."