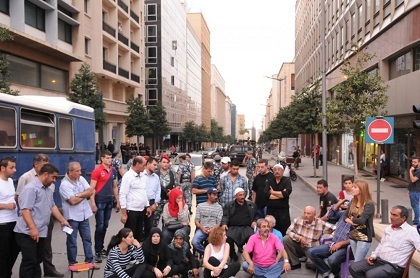 The parents of one of the soldiers taken captive by jihadists in August have allegedly received a phone call from an Islamic State militant giving the authorities a three-day ultimatum to meet their demands.

The father of captive Mohammed Youssef said he received the phone call from the IS fighter at 10:00 am Thursday.

He claimed that the militant said: “You have three days or else you will lose your children. We will call all the families.”

The relatives of the soldiers and police taken captive in the northeastern border town of Arsal in August have been recently receiving such phone calls to put pressure on the authorities to meet their demands.

The families have been staging daily protests by blocking major highways across Lebanon over fears that their loved ones would be executed.

Three of the hostages were killed in August and September.

But on Wednesday, they moved to downtown Beirut's Riad al-Solh square where the Grand Serail is located and vowed to hold an open-ended sit-in there.

A third tent was erected at the square on Thursday, the state-run National News Agency reported.

“The government does not seek political maneuvers. Resolving this issue lies in carrying out an exchange,” he said.

“The relatives are taking the actions they deem fit to pressure the government and we don't believe that their sit-in in Riad al-Solh Square is bothering anyone,” Abou Faour added.

government and we don't believe that their sit-in in Riad al-Solh Square is bothering anyone,” Abou Faour added.

The minister, who is a PSP official, warned that “the execution of more captives would destroy the negotiations aimed at securing their release.”

Ask the Caporal. He knows what to do.

Z Leb GOV must also give these terrorists ultimatum! If u dont free our soldiers we will also start decapitating the 400+ scum bags sitting in Roumieh and other prisons in Lebanon!
-------It is a simple equation..