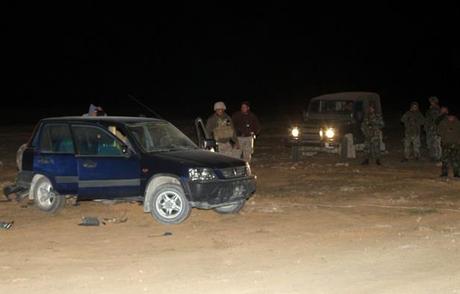 The army on Thursday repelled an infiltration attempt by Syrian gunmen in the outskirts of the Bekaa border town of Arsal, after repulsing two attacks on its posts in the area overnight.

"The army clashed with a number of Syrian gunmen and repelled an infiltration attempt in the Arsal area of al-Masyada," state-run National News Agency reported in the evening.

Earlier on Thursday, the army said it confronted an armed terrorist group that plotted to attack a military post on the Arsal's outskirts.

The military said in a communique that the jihadists sought to attack the post after midnight Wednesday. But soldiers engaged in gunbattles with the terrorists, forcing them to withdraw from the area.

The army's post in al-Masyada in Arsal's outskirts also came under fire from a nearby encampment for Syrian refugees, said the communique.

The military responded to the sources of fire and worked on pursuing the assailants to arrest them and refer them to the judiciary, it added.

They engaged in a bloody fighting with the Lebanese army in August and took with them hostages from the military and police.

The extremists later executed three of them and threatened to kill more if the Lebanese authorities failed to meet their demands, including the release of Islamists jailed in Roumieh.

"pursuing the assailants to arrest them and refer them to the judiciary"---- honestly what good is it to send these terrorists to judiciary? LAF should get rid of these killers on the spot as they don't deserve a fair trial!
Last, it is Enough with the syrian encampments keep firing on our soldiers...they should be deported all of them back to their country.

The Islamic Republic of Iran continues to support the resistance with all means possible as it is the only party entrusted to defend Lebanon. The Republic considers Lebanon an extension of itself and will not let it down.

what happened to your other screen name btw, rft?

and you two are not?

Our National Army needs night goggles, weaponry, they're doing the best they can with what they have, and its fairly impressive.

The good that it does is that you show the legitimacy of the LAF. You can't beat evil with more evil, because that way evil is sure to win in the end. You beat evil with good.
Besides, these people use their "martyrdom" as a recruiting tool; so capture is stealing a bit of the wind from their sails...

"pursuing the assailants to arrest them and refer them to the judiciary"---- honestly what good is it to send these terrorists to judiciary? LAF should get rid of these killers on the spot as they don't deserve a fair trial!
Last, it is Enough with the syrian encampments keep firing on our soldiers...they should be deported all of them back to their country.

God bless the Lebanese Army! Down with the FSA-Al Qaeda-ISIS jihadist terrorists!

apart from your sectarian rhetoric, funny how Mustaqbal is the only party funding the LAF last of which was the 1 billion USD thru KSA. Did your hizb handover 100 USD worth of weapons to the LAF. The TOW missiles captured from your hizb by Syrian rebels clearly show HA having sophisticated weapons.

nobody was and is seeking your opinion. As far as I am concerned you are a troll. End of Story

And so what. Does not mean that m14 or mustaqbal support Sunni extremists.

not-so-greatpierro: "And so what. Does not mean that m14 or mustaqbal support Sunni extremists."

of course it does. their talking heads constantly attack the army and make subversive allegations against it. not to mention how they systematically prevents the army from doing its job, like they did after the arsal battle, threatening with fitna and sedition if the army tried to stomp nusra/da3esh.

saying facts about mustaqbal is "constant obsession with Eliminating Mustakbal & Hariri in particular" ?
i get it anonyme, you can curse all day about HA, but god forbid anyone says a word about your saudi masters.

also, it's "spilling" not "spelling" the beans, and aoun saying he guarantees his safety is neither.

i will say a word whenever i please, and your depictions of both hezbollah and mustahbal are hilarious. your brain was so brainwashed you're now braindead.

the only "constant reminder" is you, taking this one example to hammer day in and day out the same false idea.
for the millionth time, at the embassy a protester next to hashem salman took a gun out and fired, prompting the embassy guards to fire back in his direction. nothing to do with freedom of speech, and nothing to do with hezbollah.

what about Brital is it a Mustaqbal area?

do you work flamethrower? do you have a family or life? do you take a break?

I bet naharnet is your life Mr. Flamethrower. I live in Austria and every time I read Naharnet I see your posts, at least 10 per article. I wonder what do you do for living?

how stupid and braindead M8ers are:
their logic works by syllogisms:
1. mustaqbal controls akkar and arsal
2. terrorists attack the army there
3. so mustaqbal are with the terrorists

so let's apply their logic to the South:
1. hezbollah controls the South
2. israel attacks the army
3. so hezbollah are with israel!

LOL! this proves one point: that all they say is total propaganda just to scare people and shut down the voice of moderate sunnis like anonyme says

hitler had the same strategy towards the jews....

Good equation Peace. That summed up their argument.

Each day across Lebanon there are refugees that are detained for belonging to extreme groups, other than the encampments that fire on LAF.
Conclusion, Lebanon can no longer accept such acts, the refugees must go home.....