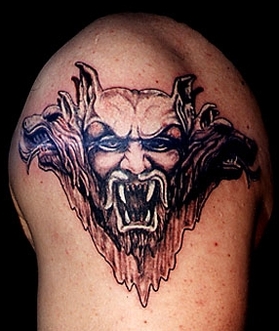 Eight people, including several girls, were arrested on Friday on suspicion of blasphemy and drug possession in Mount Lebanon.

The National News Agency said the suspects are devil worshippers and are self-harming.

What is the definition of a devil worshipper?

WTF? Lebanon is definitely a retarded country. People should be allowed to worship whatever they want, especially in Lebanon with its 17 sects. Fortune-tellers on the corniche will be next... ya 3ayb el choum

Hope it's only for drug possession that they've been arrested and not for their worshiping beliefs! As if those who "supposedly" believe in God are any better!!! Just look at our political leaders... it's really pathetic!!!

This is not worship my friend. Such practices are destructive and most of the times lead to crimes resulting in death. They involve drug and sex abuse. If you call this worship then you do have a problem yourself.

You are a FOOL "benzona" foolish boy!!!!
Didnt You see the part where they said that they hurt themselves and did drugs? or Just cos Lebanese people had the chance to learn the word WTF now they can use it anyhow. IDIOT!

Mr Benzona,
You are absolutely wrong I guess someone needs to advise about your values' compass which is pointing to the wrong direction…
Firstly, Son WTF is a very inappropriate slang expression generated in the streets and ghettos by some “indecent people” and used to express a low level of respect...let me put it this way, son always make sure you pick your words after all you are the one who is talking..Did you get the drift?
Now freedom of worshiping is absolutely a right but worshiping evil is not right son. In fact it's an insult to our human values..Those kids harmed themselves and inflicted injuries do you think this right?
Anyhow to make it short Lebanese Law prohibits Blasphemy and Immoral conduct. As far as worshiping devil i consider that to be the pinnacle of madness....I am very grateful for the media and the ISF who worked on exposing this emerging problem…..
So son take time to think before you write and in case you need help u just need to ask...
Cheers
MrBrain

I fully agree with Mr Brain; however, I disagree with his condescending and patronising laguage (e,e, "son") . Cheers :)

The people were worshipping Hezbollah...

Benzona,
You are right on. It is a slippery slope to allow the government to define indecent speech (as peabrain did), or define what should be considered as appropriate religion. I for one will not allow well known hypocrites, scoundrels, thieves, fanatic politicians to define for me the appropriateness of moral compasses. Remember, these are the same politicians who buy and sell votes and use their positions as personal troves.

Blasphemy laws are tools to permit a tyrannical government to pick a preferred religion or two. If you think about it, most religions are blasphemous against other religions! So, should we now throw in prison those who reject our holy books?

And one more thing. Don't let a condescending, self-righteous fool give you lectures about decency. This is usually a pretty good indication of over-active hypocrisy neurons. Especially in the case of our local curmudgeon, who'si missing a few synapses.

Let people be, and keep thy religion to thyself.

As long as they are not influencing minors or using drugs let them free. We all know that they are not the real threat to our society but rather the corrupt politicians who robbed the society and killed innocents citizens.
Leave them alone.
Anonymous

If the lebanese gov is worried about people hurting themselves they should prosecute the whole gov because they are hurting the lebanese people. this is a stone aged law and should be abolished. you only see this in iran . ooops i forgot lebanon is an annex of iran. the people arrested are in deep depression of what is going on in the country they even went to the devil seeking help.. what next? are they going to stone prostitutes to death? the laws are shiftings towards a strict shariaa laws. abolishing freedom of religion or freedom itself.people are free to worship whomever they like as long as they are not hurting any one else or the country. this is a bad sign .how about the people with no jobs. no food no housing no health support?

I'll say hozbullah is a devil Worshippers and who the hell decide on what or what not that a person can worship? they shall worship who ever they want as long as they are not harming anyone.. this is what Free Lebanon would be

What bothers me is the title: "Devil Worshippers Arrested" and the picture of the tattoo..
This will make people think they were arrested for devil worshipping!
Usually they bring up this tag when people are listening to Heavy Metal.
You can't arrest people for listening to music...
Anyhow this title and news makes the Lebanese look stupid, please change it to "drug addicts arrested."

Wow, I can't believe this day will come... again!
Back around 1991-92 there was an "inquisition" campaign against devil worshippers as well. Those were the beautiful days of the very first years of total Syrian hegemony over Lebanon, and to distract the people from the taste of the syrian boots they rounded us in schools and "exorcized" us with courses about the satanic danger of heavy metal music and skeleton black t-shirts...
Almost 20 years later... we're still in the same place!
20 years people, 20 years and we didn't evolve not one bit!
One thing we certainly evolved in is the youth drug consumption,
98% of university students in Lebanon have used at least one form of drugs.
Wondering why? Don't ask Satan that question!

@mrbrain. You're retarded. Illegal possession of drugs and endangering others is punishable by law, but beliefs and freedom of expression/speech should be 100% legal even if you don't agree with them. Oh yeah, I almost forgot, illegal possession of arm is a crime too!

Oh Brother!! Lebanon under this Iranian-Syrian regime imposed retarded Vichi government is starting to sound like Iran, what next arrest people for having "wet dreams", or believing in the "Boogie man" or wait.. what are they going to do on Halloween when children dress up as "Gools" and " Grim Reapers" and "Devils" ..hoooooo! what are they going to do arrest them as well? This is just an attempt at mind control by people that have no idea what freedom of thought and expression means or have never lived it. A slave imposing slavery on others much Like the Iranian regime, misery Loves Company I guess. Another distraction from the real issues threatening the country like the resolution of the weapons of the Iranian Cancerous terrorist organization Hezbollah and arresting its criminal terrorist members that have been indicted by the STL to stand trial.

These Kids are most probably venting out their frustration against the current situation in Lebanon in one of the ways they still can, a sort of escapism from the harsh reality the country is living in which the Corrupt, Murderous, zombies of the Syrian and Iranian regimes are in power and the country sinking further in debt and getting further under developed which is a stark contrast of the real intellectual capabilites of the free Lebanese educated youth, that are doing very well everywhere else in the world except in their own country, this country that is being Hijacked by Qom grown criminal barbarian Neanderthals with clubs the likes of Nasrallah and his gang.

They should be allowed to worship whatever they want.

Islam does the devils work.

I am waiting to See Naharnet doing the following:
1- Removing all provocative and irrelevant sectarian comments ( e.g Unjustifiably insulting and involving political figures and parties)
2- Banning Benzona for lacking basic and minimum respect ( i.e calling himself son of the B.... in Hebrew). I respect the freedom of speech but I don’t respect anyone who is calling his mother a B…..The participant should respect the readers, the other participants and the side who is hosting them (Naharnet)
Naharnet it's time to set up some rule of thumbs...
MrBrain

Now which ones are more destructive?
those devil worshipers or the worshipers of a some rat hiding in the sewer?

Leave these guys alone.drug possession?if it is for personal use?.
Maybe The mighty lebanese army (biggest joke on earth)and ISF should be paying a visit to Bekaa and Baalbak or maybe bourj el brajneh chasing some real drug dealers?

The Tatoo resembles Nassrallah after he had sex with Aoun. That's Nassrallah picture you guys its so obvious..

This reminds me of the early 90's in school...if you had a cassette for the band Nirvana, they claimed you were a devil worshiper and you were a threat to others...i hope this isn't the same case.

As for the tattooed head, its the same image on a shirt i had 15 years ago for the movie Dracula...lol reminds of me a Lebanese guy i had met that tattooed the "Bacardi" bat logo on his arm

Mr brain did u reach puberty or not yet?
I only ask this because when i read what u wrote out loud you sound like a 5 year old.

I understand the arrest of only 8. Too bad that Lebanese prisons cannot handle the Satan Samir Geagea and the thousands of his dumb followers.

The only devil worshipers in Lebanon are the Massons!!!!! They should be put in jail and there lodges are found all over lebanon. Verdun Achrafiet Tyre Tripoli Baalbek Shameful!!!!!!

What i dislike most in all the comments given is the fact that you all did what lebanese know how to do best : integrating politics and insulting each other by getting far from the heart of the subject...
I can't beleive that 4 very poor in information phrases immerged that lot of hate towards each other!!!! and how distructive is that!!!!

i don't allow myself to judge both parties because of lack of information, we don't know what these people where doing when arrested, and it's not like the government is arresting devil worshippers every day!!!

So anyone who have more info about this, please don't hesitate to share it with us...