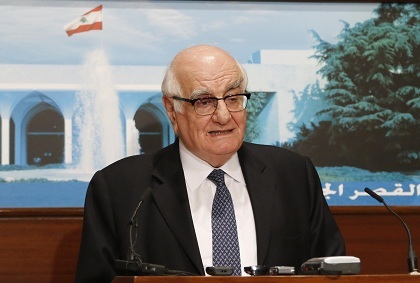 The cabinet on Thursday endorsed a plan aimed at halting the flow of Syrian refugees into the country, except for “humanitarian cases,” noting that any displaced person who visits Syria after the decision will be stripped of the refugee status.

“The cabinet endorsed the paper related to restricting the entry of refugees across the border, except for humanitarian and extraordinary cases,” Information Minister Ramzi Jreij announced after a cabinet session at the Grand Serail.

Under the plan, Syrian refugees will be encouraged to “return to their country or to other countries,” said Jreij.

“The Lebanese laws will be implemented on them and anyone who tries to visit Syria and come back will be deprived of the refugee status,” the minister added.

He said the state will obtain all the information necessary about the refugees in order to “decrease their numbers according to the international norms.”

As for the impact of the refugee crisis on the security situation in the country, Jreij said security forces are continuing their efforts to control security at refugee gatherings, noting that the municipalities have been tasked with conducting statistical surveys in their areas.

“There should be balance in the amount of aid offered to the refugees and the hosting communities” and “direct funding must be offered to the state through programs between donors and the Lebanese authorities,” Jreij added.

The number of displaced Syrians in Lebanon has surged to around 1.5 million since the eruption of the civil war in their country in March 2011, which has severely affected the nation's already ailing economy.

Many in Lebanon fear that by granting the refugees more basic rights, this would lead to their permanent settlement in the country and alter the demographic map.

Separately, Jreij said the government hopes the media “will take part in an awareness campaign over the dangerous Ebola disease.”

He also noted that the government asked the relevant authorities to “inspect the infrastructure in Dinniyeh and the areas that were affected by the heavy rains” in recent days in order to start repairing the damages.

would Iran take a few since it infinitely supports the palestinians?

The headline doesn't say which government had made this decision, which state, which nation.

Excellent news. Now send all the Syrian and Palestinian refugees to the kingdom of terrorism, which is responsible for their plight in the first place.