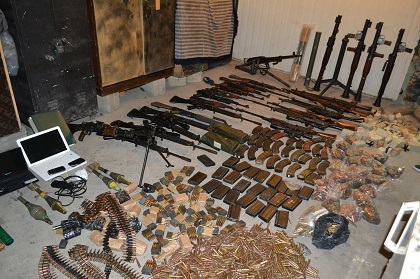 The army said Friday it has arrested several people suspected of attacking soldiers and seized weapons and ammunition from a depot in the northern city of Tripoli.

The military said in a communique that eight Lebanese were apprehended for involvement in shooting attacks and for tossing grenades at military posts.

It also arrested six suspicious Syrians who had been wandering in Tripoli without proper identification.

The Army Command stated: “During a patrolling inspection in Tripoli's Souk al-Khodra, the army found a 107mm booby-trapped rocket and 5 explosive devices for remote bombing, weighing about 23 kg, that were placed by gunmen to target army troops, during the implementation of the recent army operations in the town. The army then imposed a gasket around the place and the military expert arrived to the scene and worked on dismantling them."

It seized rifles, machineguns, rockets, hand grenades, ammunition, explosives and military gear from a depot in the area, the communique added.

It later explained in another statement that it monitored on Thursday night suspicious activity linked to this area, which prompted it to carry out the raid and discover the depot.

Investigations revealed that the weapons belong to Bilal Diqmaq.

Sheikh Bilal Diqmaq is head of the Iqraa organization for social development.

Also on Friday the army discovered five explosives near the Rawshani mosque that were probably left over from the recent Tripoli clashes.

The army has been carrying out large-scale raids since weekend battles with extremists in Tripoli and the region of Koura in search for suspects. Scores of militants have been arrested.

I wonder were is the Lebanese Army putting these soaring numbers of Takfiri Jihadists. The reason I ask is that Lebanon does not have enough public prisons to accommodate all these terrorists.

Please, Sebouh80 (Guest) I ask you politely not to use my private guest name that I use all the time. You can choose any name you like like Abbas Madras or Jaafar 3antar but why mine???

Sebouh
I asked myself the same question but take my word they are releasing them. Think about it our prisons are already crowded and they have been arresting an average of 30 per day. where can they possibly put them? so they are being released with wasta

peacelover
I wish it could happen but I think you are dreaming. Our army's top management is corrupt and our guys are under trained and under equipped so they are very far from being one of the world's best. It is very sad but it is reality

roro, will wolf be posting tonight or you both will be using this screen name?

It seems that there is always associations between Sheikhs and Imams with Militancy,weapons and terrorism. Both Sunni and Shii Islam are guilty of acts against human rights. Time for serious reformation of Islam to eradicate Radical / Political Islam from the teachings of the faith, or risk facing eternal backradness and cultural decay.

Jeez, some mods have gone wild on deletions. Then I see posts with slurs, and they seem to stick, wow, impressive.