Suspects Arrested in Tripoli for Assaults on Army 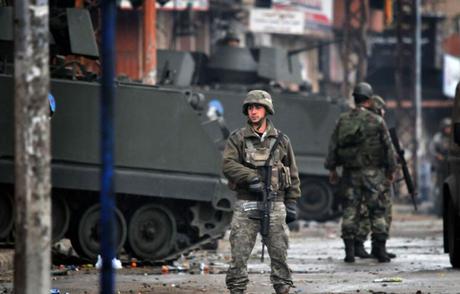 The army announced on Monday the arrest of seven suspects in the northern city of Tripoli wanted on various charges.

The army said that suspect Ahmed Ahmed Khalaf was detained for opening fire and tossing hand grenades against army positions.

A number of soldiers were wounded in the attack.

Meanwhile, another Lebanese was arrested in al-Beddawi area in Tripoli on shooting offenses.

In addition, five Syrians were detained for entering Lebanon without the proper legal papers, said the army communique.

The army has been carrying out in recent months raids against various targets throughout Lebanon in search of gunmen involved in attacks and clashes against the military.

The most recent fighting took place in the northern Akkar town of Bhannine on October 24.

A number of soldiers, civilians, and gunmen were killed in the unrest.

yeah bro once always once and then comes afterwards. I agree with you bro