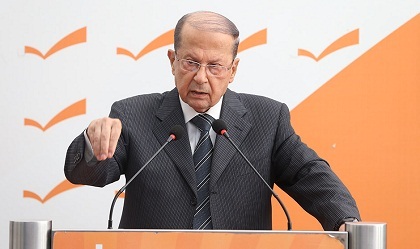 The two Hizbullah officials held contacts with Foreign Minister Jebran Bassil, who is an FPM official, on Monday. The pressure they are exercising on Aoun is expected to last until the session is held.

The Change and Reform bloc is expected to boycott the session.

Despite the boycott of other Christian lawmakers, quorum is guaranteed at the legislature, whose term will be extended for two years and seven months.

Nasrallah said Monday he supported the move to avert a vacuum, which has been exacerbated by the failure to elect a successor to President Michel Suleiman whose term ended in May.

@geha, this is all planned. Aoun needs to look good in front of the Christians by appearing to oppose the extension. The quorum is already secured and Aoun's abstention will not make any difference. It is just for political posturing. If Aoun was serious about his opposition of the extension he and his bloc would resign.

wow impressive how your analysis is accurate...and you still have some i.i.t. to agree (-:

Any Christian following a traitor, is a traitor.

Why isn't Hezbollah seeking Aoun to resolve the presidential vacuum?

Two years and 7 months extension of a parliament elected in 2009, so far, this 4 year parliament is still in power 5 years later and now almost 8 years before it will be made subject to election.
And why is this?? Because Hezbollah and Aoun know that their obstruction and destruction of the State and its institutions will not be rewarded at the polls by the people voting them into the majority. In fact, they know that they stand to lose seats and so they vote to deny the people the right to choose their elected representatives. They are in this past extension and in the 2 year 7 month extension that is proposed usurpers, false representatives, thieves holding the seats of the people against the people's will.

This is not the Change and Reform Bloc. This is the Bloc-Head, Aoun, who stands for neither reform not change, but for obstruction and corruption.