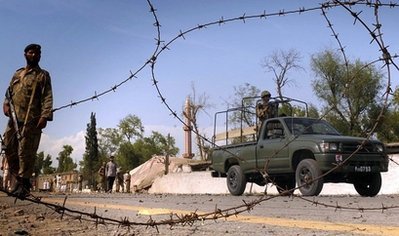 An enraged Muslim mob beat a Christian couple to death in Pakistan and burnt their bodies in the brick kiln where they worked on Tuesday for allegedly desecrating a Koran, police said.

The incident took place at the town of Kot Radha Kishan, some 60 kilometers (40 miles) southwest of the city of Lahore, and is the latest example of mob violence against minorities accused of blasphemy.

"A mob attacked a Christian couple after accusing them of desecration of the holy Koran and later burnt their bodies at a brick kiln where they worked," local police station official Bin-Yameen told AFP.

"Yesterday an incident of desecration of the holy Koran took place in the area and today the mob first beat the couple and later set their bodies on fire at a brick kiln," he added.

Another police official confirmed the incident. The victims were only identified by their first names, Shama and Shehzad, and were a married couple.

Pakistan's brick kiln workers are often subject to harsh practices, with a study by the Bonded Labor Liberation Front Pakistan estimating that 4.5 million are indentured laborers.

Punjab Chief Minister Shahbaz Sharif has constituted a three-member committee to fast track the investigation of the killings and ordered police to beef up security at Christian neighborhoods in the province, an official from his media office told AFP.

Blasphemy is a hugely sensitive issue in the majority Muslim country, with even unproven allegations often prompting mob violence.

Anyone convicted, or even just accused, of insulting Islam, risks a violent and bloody death at the hands of vigilantes.

A Christian woman has been on death row since November 2010 after she was found guilty of making derogatory remarks about the Prophet Mohammed during an argument with a Muslim woman.

An elderly British man with severe mental illness, sentenced to death for blasphemy in Pakistan in January, was shot by a prison guard last month.

Global rights watchdog Amnesty International in a statement urged the Pakistani authorities to bring to justice those responsible for the vicious mob killing.

"This vicious mob killing is just the latest manifestation of the threat of vigilante violence which anyone can face in Pakistan after a blasphemy accusation – although religious minorities are disproportionately vulnerable," said David Griffiths, Amnesty International's Deputy Asia Pacific Director.

"Those responsible must be brought to justice and the Pakistani authorities have to ensure at-risk communities are proactively given the protection they need."