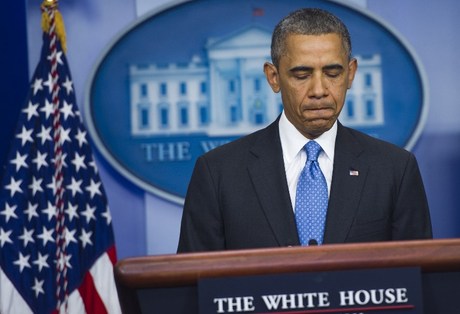 Riding a wave of voter frustration with Washington incumbents and the unpopular policies of the Obama administration, Republicans seized at least seven seats from Senate Democrats to claim total congressional control for the first time since 2006.

"The American people have put their trust in the Republican Party," Republican National Committee chairman Reince Priebus said shortly after the Democratic implosion.

Mitch McConnell, the Senate's top Republican, brushed aside the toughest challenge to his Kentucky seat in 30 years and was slated to replace Harry Reid as Senate majority leader.

"This experiment in big government has lasted long enough. It's time to go in a new direction," McConnell boomed to supporters in his victory speech.

But he sounded a conciliatory note as well, adding that while he and the president rarely see eye to eye, "we do have an obligation to work together on issues where we can agree."

"The message from voters is clear: they want us to work together," Reid said.

Republicans have held the 435-seat House of Representatives since 2010, and they kept it safely in hand Tuesday.

In a bipartisan achievement, for the first time ever more than 100 women were projected to win House seats.

But compounding Democratic woes, projections showed the GOP could actually gain an impressive 14 to 18 House seats, giving Republicans their largest majority since 1946.

Republicans also cleaned up in key governors' races, earning re-election in Florida, Wisconsin and Kansas and stunning Democrats by winning governorships in blue Maryland and Massachusetts.

But of the 36 governors' races, probably the most painful for Obama was Illinois, where Republican Bruce Rauner ousted Democrat Pat Quinn in the president's home state.

Democrats worked feverishly to draw voters to the polls in a last-gasp effort, but it was not enough to halt the Republican juggernaut.

With no legislative base in Congress, Obama will struggle to pass any reforms in the final stretch of his mandate, and his opponents will be able to thwart his appointments to judicial and official posts.

The party of an incumbent president historically fares badly in elections in his second term, and every president since Ronald Reagan has left office with the opposition controlling Congress.

The Republicans, capitalizing on the nation's sour mood despite an economic recovery, essentially based their campaigns on attacks against Obama and policies like his troubled health care reform.

"It was a powerful repudiation of the Obama agenda," conservative Senator Ted Cruz told CNN.

But he repeated what many in his party have urged, that the responsibility now falls on Republicans to govern, particularly in the run-up to the 2016 presidential election.

"We are humbled by the responsibility the American people have placed with us, but this is not a time for celebration," House Speaker John Boehner said, adding he hoped Obama would not launch a 'counterattack' on the Republican majority.

"It's time for government to start getting results and implementing solutions to the challenges facing our country, starting with our still-struggling economy," Boehner added.

While Republicans are likely to cooperate on issues like tax reform, the party will seek to breathe life into their stalled jobs bills, to gain approval of the delayed Keystone XL pipeline, roll back some carbon emission regulations and tweak Obamacare.

Election night was ugly from the get-go for Obama's party.

Democrats including Senator Mark Pryor of Arkansas, Kay Hagan of North Carolina and Mark Udall of Colorado fell like dominoes as Republicans capitalized on a particularly strong set of candidates, including Arkansas' Tom Cotton and Colorado's Cory Gardner, who successfully convinced voters they would be better off with leaders not loyal to an unpopular president.

Democratic Senator Jeanne Shaheen of New Hampshire held her seat, but that was the only good news for Democrats, as Republicans fended off challenges in GOP strongholds Georgia, Kansas and Kentucky.

The onslaught could well deepen for Democrats, with an unexpected cliffhanger remaining in Virginia, Alaska up in the air and Louisiana Democratic Senator Mary Landrieu forced into an unfavorable December 6 runoff.

The Republican performance appeared to surpass most expectations.

"They've done this about as well as they could conceivably have done it," University of Michigan assistant professor Michael Heaney told Agence France Presse.

A chastened Obama has invited the four congressional leaders to the White House on Friday.

Democrats should have behaved like HA/Amal and Mustaqbal and extended the term of the senate.

America is not weak; Obama is.

hahaha! Hezbollah defeated Obama even in the Senate