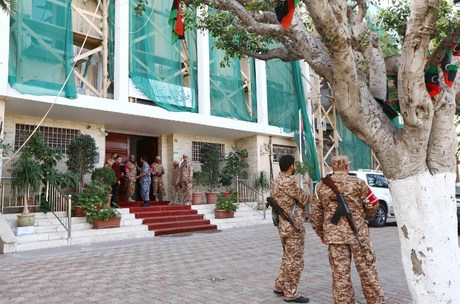 Libya's internationally recognized parliament on Thursday rejected a supreme court decision to nullify it, saying the ruling was taken "under the threat of arms".

"The House of Representatives rejects the verdict under these conditions and says it is still functioning, as is the government" elected on June 25, an official statement broadcast live on Libya Awalan television said.

The ruling, which cannot be appealed, prompted celebratory gunfire in the capital Tripoli where Islamist-led militias have been in control since August, an AFP correspondent reported.

The Tripoli court also nullified a constitutional amendment that led to elections on June 25, thereby invalidating the polls and all decisions that resulted from them.

The internationally supported government of Prime Minister Abdullah al-Thani is sheltering in the remote eastern town of Tobruk near the Egyptian border and has almost no control over Libya's three main cities.

The legislature's legal committee called an emergency meeting to review the court ruling.

"Lawmakers will not recognize a verdict decided under the gun," Tobruk-based parliamentarian Issam al-Jehani wrote on Facebook.

Libyan authorities have struggled to assert control across a country awash with weapons and powerful militias that ousted longtime autocratic leader Moammar Gadhafi in a 2011 revolt.

There was no immediate response to the ruling from the administration led by Thani, who was appointed prime minister in March by an interim parliament that has since been dissolved.

He submitted his resignation in August, but the elected parliament asked him to form a new government.

The supreme court had been asked by an Islamist lawmaker to rule on the constitutionality of the legislature that approved Thani's government, one of two rival administrations in the oil-flush country.

Abderrauf al-Manai, who with other Islamist lawmakers has boycotted the parliament's sessions in Tobruk, argued that the legislature was in breach of the constitution because it was sitting in neither Tripoli nor second city Benghazi.

He had also argued that the parliament had exceeded its authority in calling for foreign military intervention after the militia takeover of the capital.

"I hope all parties will respect the decision of the court," Manai told television broadcaster Al-Nabaa.

Former rebels who fought Gadhafi have formed powerful militias and seized control of large parts of turmoil-gripped Libya over the past three years.

Most lawmakers who are boycotting the internationally recognized parliament support Fajr Libya, an Islamist-led militia alliance that has formed a parallel government known for its Islamist sympathies.

The supreme court ruling follows intense clashes between pro-government militias and Islamist fighters in Benghazi that have killed more than 30 people in the past three days, according to medics.

Witnesses have described the fighting, which included heavy shelling, as among the fiercest since former general Khalifa Haftar launched a new government-backed offensive on the eastern city in October.

Islamist militias, including fighters from the radical Ansar Al-Sharia group, took near total control of Benghazi in July.

Ansar al-Sharia is blacklisted by Washington as a terrorist group for its alleged role in a deadly 2012 attack on the U.S. consulate in Benghazi.

France, Britain and the United States on Tuesday asked a Security Council committee to add the group to a U.N. terror list for its ties to Al-Qaida.