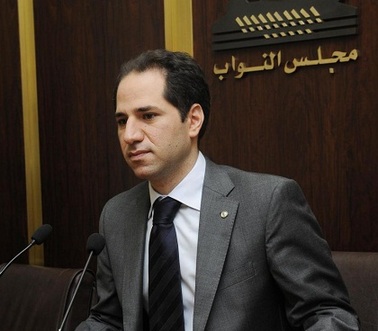 Kataeb party MP Sami Gemayel decided to give up his salary from the parliament to the families of army martyrs, al-Joumhouria newspaper reported on Friday.

According to the daily Gemayel informed Parliament's Secretary-General Adnan Daher in an official memo that he “wants to give up indefinitely his salary starting of the first month of the legislature's new tenure to the fund of compensations for army martyrs.”

Gemayel's decision comes two days after lawmakers voted to extend their mandate until 2017, postponing elections again amid a political stalemate and insecurity tied to the conflict in neighboring Syria.

“What happened today is an extension of vacuum,” Gemayel said in a tweet on Wednesday.

Parliamentary elections were originally scheduled for the middle of 2013, but MPs approved a 17-month extension of their mandate on May 31, 2013.

The extension decision was met by a huge popular dismay.

Excellent gesture from Sami Gemayel. I hope all MPs will follow suit.

@slash
Do you have any information as to why I was banned?

he's just from a very rich family the MP salary is nothing for him. this move is more of a media stunt than anything else.

The FPM MPs should resign immediately and stop embarrassing themselves. They are part of this government that failed to prepare for the elections. The FPM had every chance to object inside the cabinet rather than on public forums.

11 downvotes? Lol, oooook yea, those multiples accounts DEFINTIELY are legit lmao!!! This site is such a joke

14 downvotes? Lol, oooook yea, those multiples accounts DEFINTIELY are legit lmao!!! This site is such a joke

Impressed !!! Good on you Sami. He shows by giving up his salary to the army families he is an Honorable Man and most important knows what DIGNITY means. But...but and as Aristotle said: One swallow doesn't make a summer

Great Publicity stunt from the part of Sami Gemayel. This comes at a time of growing serious public uproar against the "illegal" extension of the the mandate of 128 deputies, and Sami Gemayel's recent move comes nothing short of Public relations campaign just in order to improve his political image among the people in this critical juncture.

Please, CFTC-Sebouh80 (Guest) I am asking you politely not to use my own private guest name that I have been using since the big explosion. Kindly, choose another name like Abbas Madrass or Jaafar 3antar but why mine???!!!

since all parliamentaries renew for themselves without a legal mandate from the people all of them should not be paid , let them work for free
god bless democracy (power to the people )

if FPMers and kataeb find the extension unconstitutionnal and illegal then the only thing to do to show their honesty is resign! not play the hypocrites! how can they be part of something they claim to be illegal? LOL

The comments on this story are a prime example of what's wrong with the Lebanese population when it comes to politics. Regardless of your political association and belief, Sami's decision should be regarded as a positive initiative. Instead, we see remarks about his allegiance, his motives and so on.

We often blame the political leaders for all the problems we are in. Sadly, it seems like the blindness with witch some people follow certain political movements often makes them more extreme than the movements themselves.

All FPM officials should be doing the same as Gemayel, that's if they're really against extension. But of course, they're not, they just boycott knowing they can't change the outcome of the vote