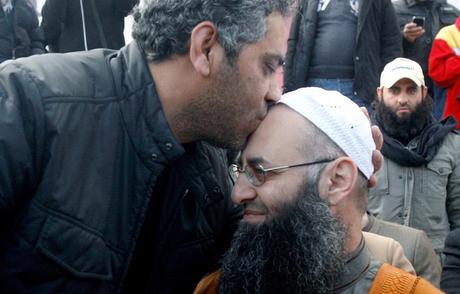 The daily reported that informants said the bakery is run by Mohammed Baydoun, who is also wanted by the judiciary.

The three shops are reportedly scattered inside the refugee camp.

Now in his mid-forties, Shaker was born to a Palestinian mother and Lebanese father in the country's biggest Palestinian refugee camp, Ain al-Hilweh.

Shaker became the best-known face of salafist cleric Ahmed Asir's small movement of openly sectarian Sunni radicals and praised the cleric as "the lion of the Sunnis".

Judicial authorities have issued a detention order for Asir and 123 of his supporters, including Shaker, whose brother was killed in clashes with the army in Sidon last year.

I respect this man too much

another day, another week, another year, another journey as flamethrower embarks on yet another illusive dream to achieve a platinum medal in posting propaganda

Difficult times for this ignominious monster Fadel Shaker. For a man who once upon a time was respected and admired by so many and who was used to live in absolute refinement and opulence, opening such businesses in such places must mean one thing, more difficult days ahead for him and those who support him, and so much the better. Not a drop of sympathy must be extended to him, brainwashed or not, no person should entertain any liberties at shooting on the Lebanese Army, no one.

The best singer ever

Look at the bright side: It could have been worse: He could have gone back to singing...