Jumblat Is Ready to 'Personally' Go to Arsal, Negotiate for Servicemen 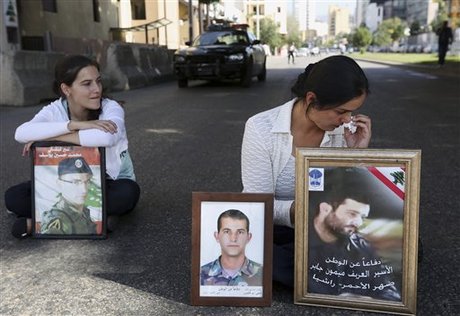 Leader of the Progressive Socialist Party MP Walid Jumblat surprised on Sunday his followers on twitter by announcing that he is ready to personally negotiate in the kidnapped servicemen's case.

Jumblat tweeted on his official twitter account: “ Stop the nerve war on the families of the kidnapped servicemen.”

"I would personally go to Arsal and negotiate,” he added.

Jumblat said: “America negotiated with Taliban for a prisoner in exchange for prisoners at Guantanamo.”

The 27 kidnapped service men are still in the hands of the jihadists, who stormed Arsal in August and killed 20 soldiers and 16 civilians.

From that day, the families of the kidnapped soldiers and policemen have been protesting almost daily to put some pressure for the release of their children, after difficult negotiations led by a Qatari envoy.

Earlier on Friday, the security forces broke up by force a sit-in by the parents in al-Sayfi, where they blocked the road on the citizens.

Someone send him PLEASE..

i would propose to exchange w. joumblatt against all our soldiers and policemen...is there anybody against this ? ...would be a perfect present for families for Christmas !!!

Servicemen means military not civilians...
not only your mononeurone is no more functionning, but you need to go back to school.

The more and more I read the comments of the supporters of the caporal, the more I realize their common denominator: IQ next to zero.