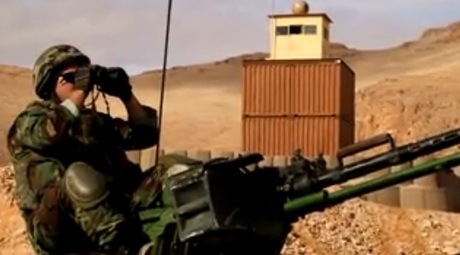 Six Lebanese troops were killed and a soldier was injured Tuesday as militants staged an ambush against an army patrol in the outskirts of the town of Ras Baalbek on Syria's border.

An army statement said the patrol was conducting a “surveillance mission” in the area at 5:15 pm when it “fell into an armed ambush by a terrorist group.”

“A clash ensued between the patrol's members and the terrorist group, which resulted in the martyrdom of six soldiers as a seventh sustained non-lethal injuries,” the statement added.

The attack prompted the army to “send reinforcements to the area as military units took the appropriate military measures,” said the statement.

Media reports said the Airborne Regiment shelled the positions of the gunmen with mortars and fired flares to prevent any infiltration.

Meanwhile, MTV said “the bodies of the six troops and the wounded soldier were transferred to the Universal Hospital in Baalbek.”

Voice of Lebanon radio (93.3) identified the wounded soldier as Jamal al-Merehbi, saying he hails from the northern city of Tripoli.

The clashes come two days after the British Telegraph newspaper reported that a British team had saved Ras Baalbek from a "massacre" by advancing Islamic State (IS) militants through constructing a network of military watchtowers in the town.

MTV said later on Tuesday that "the IS group confirmed that it intended to target a British border watchtower before it was forced to engage in a battle with the Lebanese army in Ras Baalbek's outskirts."

The attack also comes amid media reports that Lebanon detained in the nearby town of Arsal a wife and young son of Abu Bakr al-Baghdadi, the head of the jihadist IS group that has seized large parts of Syria and Iraq.

In recent months, Syria-based IS and al-Nusra Front fighters have fought several battles with Hizbullah and the Lebanese and Syrian armies in the border region.

IS and Nusra militants briefly overran the northeastern border town of Arsal in early August. They abducted a number of troops and policemen as they withdrew from the town.

Three hostages have already been killed by the two groups, and the country has been on edge for months over the fate of the remaining soldiers and policemen.

Amen. But I would extend that doom-wish to all those who would seek to ruin our Cedared land, takfiriyye or otherwise.

Since Arsal, one could only tell that our beloved army will pay a high price, and it is for this reason that, A: The weapons requested by our army be sent at the very earliest. B: Re-enforce our border with Syria substantially. C: Start taking all Syrian refugees to camps, then the deportation of Syrian refugees without delay. It is a very dark day whenever our soldiers get killed by these evil terrorists, and that is why I keep saying, hang them as soon as our army catches them.

bro phoenix I somehow agree with you on this one bro. But why those attacking the lebanese army are not attacking the jordanian army for example bro. I know you respect nasrallah maybe you can ask him bro.

our soldiers are dying because of hizballa sectarian war on the syrian people.

If someone constantly told you how to correctly spell Christian, as in follower of Jesus Christ and you kept spelling it Cristhian any casual observer would come to the conclusion that you either are a total retard or just doing it on purpose to try and pretend you are someone you're not. In this case here it's probably both.

Yea not a paid stooge.. Not one bit

The soldiers that fell today were heroes. Those extremists are cowards and should be eliminated.
Our army will wipe them out very soon.

"The SAA are in a war against Saudis, Turkey, NATO, EU, Saudis, Qatar, Israel, Al-Nusra and ISIS in Syria territory..."

my friend, was that before or after Assad freed the Al-Nusra and ISIS leaders and fighters from his jail and let them loose in the Syria territory

Time to execute all filthy terrorists in roumieh

Chupa: Seriously? Execute them all just like that? Without due legal process or anything? So how, in the Eyes of God, will we be any different from those very same ISIL scum that we are to execute en masse?
Of course, having read your previous posts, I know you don't literally mean it. But seriously mate, this, of all times, is the time to keep cool and not rush to fall into the very traps of lapses in moral judgement that ISIL and their ilk are baiting us to drown in.
Cheers, and sigan chupando. ;)

*sigh* @Other terrorist: Far be it from me to judge on what you should be putting in your mouth, but why don't you do it elsewhere? It may have been funny-because-confusing at the outset, but now you are simply being disgusting. Cheers.

Picture of, the martyrs of todays attack:

Science cannot be associated to any race, religion or creed. Science is a journey of discovery.
Religious dogma and science are incompatible.
When Christianity took over Europe in the Middle Ages it killed sciences. Science evolved when the dogma weakened as societies there got richer and more stable politically.
On the contrary, in the Middle East and in the early Islamic empires, sciences played an imminent role until dogma took over and killed any form of free thought around 1500 AD.
Meanwhile, science evolved at the speed of light in the West and in the East but we were left very far behind.
And things started to get worse and worse with the rise and rise of Islamic fundamentalism.