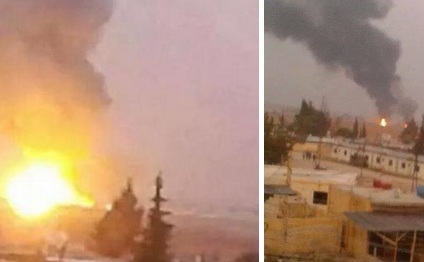 Israel said Monday it will not allow "sophisticated weapons" to fall into the hands of its enemies, after furious claims from Syria that Israeli warplanes carried out air strikes near Damascus.

Tel Aviv refused to confirm or deny the strikes, but its forces have previously targeted weapons allegedly destined for arch-foe Lebanon's Hizbullah.

The two strikes on Sunday, including one on the country's main international airport, were fiercely condemned by Damascus, which called for U.N. sanctions against Israel.

"We have a firm policy of preventing all possible transfers of sophisticated weapons to terrorist organizations," Steinitz said, in a clear reference to Hizbullah.

Israel has launched a series of air strikes inside Syria since the outbreak of the country's armed uprising in 2011, including raids reportedly targeting Iranian rockets bound for Hizbullah.

The Syrian army said Sunday's strikes by "the Israeli enemy" had targeted two areas near the capital, including Damascus International Airport, which is used by both civilian and military aircraft.

It said the strikes caused damage but that nobody was hurt.

"This direct aggression by Israel was carried out to help the terrorists in Syria," the army said, using the regime's collective term to refer to peaceful opponents, armed rebels and jihadists fighting in Syria.

There was no threat of retaliation, but the Syrian foreign ministry said it had asked U.N. Secretary General Ban Ki-moon and the Security Council to impose sanctions on Israel, describing the strikes as "a heinous crime against Syria's sovereignty."

According to the Britain-based Syrian Observatory for Human Rights, which monitors the conflict, both of the targeted sites were used for military purposes.

"Both were military sites, and weapons were being stored there," Observatory director Rami Abdel Rahman told Agence France-Presse.

Damascus has accused Israel of carrying out several air raids on its territory since the beginning of 2013, including one in the Quneitra region of the disputed Golan in March that killed a soldier.

Israeli media said the latest raid had targeted weapons such as anti-tank rockets and surface-to-air missiles meant to be delivered to Hizbullah.

There was little doubt among Israeli commentators on Monday that the country had carried out the strikes.

"There must have been a brief window of opportunity yesterday and the decision to strike was taken," Israeli army radio said.

Some Israeli opposition figures raised questions about the timing of the strikes, which came after Prime Minister Benjamin Netanyahu called early elections.

Netanyahu is looking to shore up his support on the right ahead of primaries for his Likud party and the snap vote in March.

"I hope this isn't the opening salvo of the campaign for the Likud primaries and the next elections," Ilan Gilon of the leftwing Meretz party said.

"Those who accuse Netanyahu of having ordered a bombing in Syria as a political strategy are ridiculous and harmful," he said.

Some commentators said a possible response from Damascus or Hizbullah to the strikes could set the tone for the election.

"We have finally given a 'serious person' -- Bashar Assad -- the job of deciding what the agenda of the coming elections will be," Alex Fishman wrote in Yediot Aharonot newspaper.

"The Syrians' response... will dictate the headlines and the public focus in the coming weeks and months."

The Syrian conflict, which evolved from a pro-democracy movement into a full-blown civil war, is estimated to have killed more than 200,000 people and forced half the population to flee their homes.

Israel just put its poodle in place.
A spanking for its concierge boy.

Yalla! the great pro-Assad Syran Army should retaliate... unless it is too busy killing its own people.
After so many Israeli raids, Assad must enjoy it now!

Actually Assad, Al Nusra, Hezbollah, ISIS all help Israel.
Imagine if Israel had democracies all around it, it would have been forced by the world community to make a just peace.
But Israel makes sure that its enemies are dictators and bearded fanatics, (remember who made Hamas and then armed it against the newly reborn PLO after the first successful Intifada), in order to make world public opinion forget about its crimes and its occupation.

"Imagine if Israel had democracies all around it, it would have been forced by the world community to make a just peace. "
This is 100% correct, there is a lot more more power in a democratic, non-violent approach to the problem of Israeli occupation than the Kalashnikov-way.

I am not a fan of the Assad regime, but seriously, on how many fronts can you expect the Syrian army to fight? For three years, it has been under attack by Israel, Turkey, ISIS, Nusra, in Deraa, Hawran, Qalamoun, Deir El-Zor, Damascus, Aleppo, Homs Province, Idlib, and even in Kassab!

I don't think that any army can be expected to fight on 8 or 10 fronts, even in the best of circumstances.

I may not be an enemy of Assad regime, but seriously, with the massive aids of Putin, Khomeinistan (HA & cie mercenaries), China, North-Korea, Venezuela, not to mention Obama indirect yet decisive support to Assad through depriving Syrians of any real weaponery... etc.
.I don't think any "real" army could have been defeated
Or else could it be that "Syrian army" is nothing but a bunch of mafioso killers with nothing of an army?

Even more amusing, is you people who's trying to convince everyone, that the Syrian government or Hezbollah works for Israel. When all proofs on the ground, tends to differ with your theories.

Just read the memoirs of Victor Ostrovsky, "By Way of Deception", and see how Israel knew that Hezbollah was going to bomb the Marines and said nothing to the US. Just google it.

Furthermore, here are the dealing of Israel and the Islamic Republic of Iran: http://en.wikipedia.org/wiki/Israeli_support_for_Iran_during_the_Iran%E2%80%93Iraq_war

How Israel made Hamas from the WSJ: "Instead of trying to curb Gaza's Islamists from the outset, says [Israel official Avner] Cohen, Israel for years tolerated and, in some cases, encouraged them as a counterweight to the secular nationalists of the Palestine Liberation Organization and its dominant faction, Yasser Arafat's Fatah. Israel cooperated with a crippled, half-blind cleric named Sheikh Ahmed Yassin, even as he was laying the foundations for what would become Hamas" http://www.wsj.com/articles/SB123275572295011847

I would very much like to see Israel, fire at Al Nusra and ISIS for a change. I almost forgot, they wouldn't fire at their own children now would they?

This is exactly my point...
Without Al Nusra, ISIS, the Baath dictatorships, Hezbollah, the Islamic Republic of Iran, no country in the world would ever dare to support Israel.
Same thing happened to South Africa. The apartheid regime fell after the West stopped supporting them.
Israel will only fall when the West will stop supporting them. But they will continue to do so as long as extremist with beards and bloody dictatorships are the alternative. Therefore, Israel needs Hezbollah, Nusra, IS, Assad, Khamanei to exist.

If that was a real point, how come we only see Israel, shoot at Resistance targets? Why don't they shoot a single bullet at the takfiris swarming Quneitra?

Lots of points, actually facts, proofs that Israelis are obviously using the takfiris, FSA, Al Nusra, Da3esh you name them. To do their dirty work.

With so many takfiris in Golan, why don't they shoot at Israel? Or Israel shoot at them. Give me a clear explanation on this one.

When the West hits IS and Israel hits Assad's Syria and Hezbollah targets, it is to put a boundary and to remind them of why they were created in the first place: to make Israel look good to world public opinion.

That was not very convincing machia, if the U.S coalition along with the gulf states whom gave birth to takfirism to begin with, really wants to get rid of da3esh, then they can start by closing the borders in Turkey, Jordan, etc. They do not want this war to stop, they want it to continue.

When such a war will occur between Israel, and the Resistance again. Then we will still hear you complain. Which is why I really have no respect for M14 at all, you either blame people, for fighting back, or blame them for not fighting. No matter what to do, you will never be pleased.

Let the takfiris, whom never fired a gunshot at Israel, prove that they are against it. They never do that, instead they make a war on another independent sovereign nation, when they could have used the resources to destroy Israel.

No that will never happen, they were send by the CIA and Mossad into Syria to cut off the Resistance in Lebanon.

Israel is the airforce of ISIS.

According to your logic, the US is the airforce of the Mullah's in Iran.
But the US and Israel are allies, then this means that IS and Hezbollah are allies which is not a true statement.
The truth is that the US and Israel are allies and they are hitting both Hezbollah and IS targets but are not destroying them, just weakening them a little in order to have just enough strength to kill one another for a very long time, thus justifying the existence of Israel for a very long time.

Iran has its own airforce.

It is not only about who you attack. The US has not helped Syria, only atatcked their enemies. Israel on the other hand has treated wounded terrorists, in adittion to attacking Syria, which shows their allegiance.

Deputy Iranian Foreign Minister Abdollahian has warned that the defeat of the Syrian regime by the Islamic State would jeopardize Israel's security.

Israel is defending itself from the threat if the armament of Hezbollah whose official policy is to fight Israel till the end.