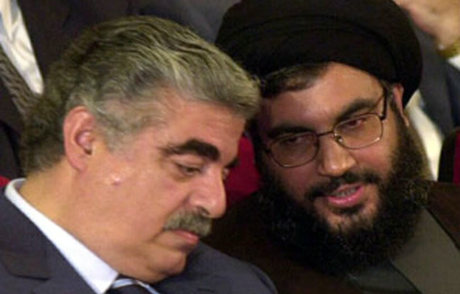 MP Marwan Hamadeh revealed on Wednesday that he had held talks in Spring 2005 with Hizbullah Secretary General Sayyed Hassan Nasrallah in order to inquire about the attempt against his life in October 2004.

“I met with Nasrallah in late April-early May to ask him if his party was behind the assassination attempt,” he said during his ongoing testimony at the Special Tribunal for Lebanon.

Nasrallah denied involvement to which Hamadeh later asked if the party's ally, Syria, was linked to the attack.

The Hizbullah chief said that he did not know if Syria was involved.

Hamadeh then told the STL Defense that his meeting with Nasrallah, which was attended by MP Nawwaf al-Moussawi, focused on local and regional affairs.

He described the talks as amicable, adding that he scheduled the meeting at the behest of Progressive Socialist Party leader MP Walid Jumblat and in the wake of the assassination of former Prime Minister Rafik Hariri on February 14, 2005.

Hamadeh also revealed that Hariri had met with Nasrallah about a month before the assassination.

The two officials had regular contacts ahead of the 2005 parliamentary elections, the lawmaker said.

Lead defense counsel for accused Hizbullah member Mustafa Badreddine Antoine Korkmaz asked Hamadeh if he was aware that Nasrallah had visited the Hariri family's Beirut residence in secret to offer his condolences, to which the MP replied that he was.

Korkmaz said that Nasrallah had presented the head of Hariri's security team, the late Wissam al-Hassan, with a Hizbullah document on the assassination.

Hamadeh replied that he was informed that he offered the family his support for the investigation in the murder, adding: “I was not present at the residence at the time of his visit.”

He also stated that he was not aware of the document that Nasrallah had handed Hassan.

Korkmaz said: “Nasrallah told the family that we know the value of blood sacrifice and martyrdom.”

Hamadeh continued: “We were grateful for Nasrallah on the one had, but we were upset with the March 8, 2005 demonstration in support and defense of the Syrian regime.”

The Defense then read a excerpts from a number of articles that Hamadeh, as a journalist, had written in praise of the Syrian regime during the 1990s and early 2000s.

When asked about how he could heap such praise on it and later allege that it was behind Hariri's assassination, Hamadeh replied: “Ties between us and Syria changed after 2000.”

“It was becoming apparent that the regime under Syrian President Bashar Assad was not keen on completing the implementation of the Taef Accord, but was seeking to seize control of Lebanon. This naturally led to the change in our stance and tone,” he noted.

The March 14 alliance, which Hamadeh is a member of, has repeatedly accused Syria of being behind Hariri's assassination, as well as several other political murders in the country over the years.

The STL is tackling Hariri's 2005 assassination.

Five Hizbullah members were indicted in the crime, but they remain at large.

They will be tried in absentia.

A number of political figures are expected to present their testimonies before the STL.

The Tribunal on Tuesday agreed to include Jumblat and journalist Ali Hamadeh as witnesses in the case.

"The Defense then read a excerpts from a number of articles that Hamadeh, as a journalist, had written in praise of the Syrian regime during the 1990s and early 2000s."

yes until they left Lebanon, then they became brave...facts people facts!

You apparently haven't spent a night in Anjar.

Should have included the remainder of the quote:
'When asked about how he could heap such praise on it and later allege that it was behind Hariri's assassination, Hamadeh replied: “Ties between us and Syria changed after 2000.”'

(1).The STL must take its time to indict the guilty beyond reasonable doubt. But, only a blind person, who is also deaf and dumb with a serious mental problem could ignore the fact that Syria under the Al Assad family has been killing its Lebanese opponents. What the old man Hafez did not finish, Bachar continued with surgical precision. Rafic Hariri was threatened several time by Bachar and his cohorts in Lebanon, Hariri was even beaten and had his army broken whilst on a visit to Syria. Hariri has the very best state-of-the-art security system and had the very best of professionals to protect him. Syria could NOT, under any circumstances assassinate anyone inside Lebanon if it did not had very close cooperation from insiders in Lebanon.

(2). Masalan, why did Emile Lahoud remove the state protection that was the right of Mr. Hariri? Who could move a ton plus of high explosives without ever being detected, and who in the first place could purchase such a scarily large amount of explosives other than big, well organized and well funded organizations or the states? Who has the logistics, the finance, in fact everything to prepare, enroll, act and cover up any such assassinations other than such large organizations or states? Let us stop monkeying around, the Lebanese state under Emile Lahoud, with absolute cooperation by Hezbollah, under the strict dictates and control of the Syrian regime of Bachar Al Assad could have committed such heinous acts.

(3). Furthermore, Syria has on its dirty neck the blood of Lebanese leaders such as president Bachir Gemayel, Kamal Jumblat, Grand Mufti Hassan Khaled, president Rene Mouawad, writer Salim El Lawzi, comedian and critic Nouhad Aboul Hassan,...just some names that were followed later on from 2005? Sayed Hassan may try very hard to wiggle out of this predicament, but try as he may, it will be next to impossible to shake off the suspicions that hang over his head, time will catch up to him, no wonder why he is trying so hard, with the support of what left of the Syrian regime and of Iran, to block any attempt to bring about a leadership of the nation that will be deemed not subservient to the agendas of those involved, suspected and implicated in all these crimes.

(4). Unfortunately, Syria's cronies had a lot of cash to splash around, today they can fabricate almost anything they wish, but facts cannot be fabricated either. The one thing that every Syrian Lebanese lackey had in the heart before the Syrian civil war, that their boss in Damascus was so powerful, almost a God, that they too were untouchable. Today all that is gone, their boss is teetering on the edge of the cliff, Iran is desperately broke and wants a way out, Hezbollah's finances are dwindling, Russia's Rouble is now down past 40% of its previous value, and the worst of all, the STL is still working to bring to all, the one and only that that matters, the TRUTH. Some will live by it, others will die for it.