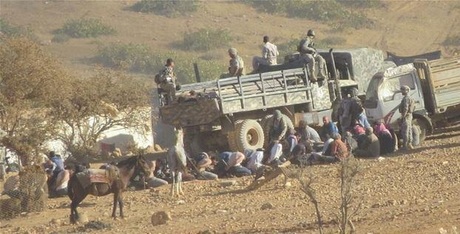 The army arrested Thursday a fugitive at a Syrian refugee camp in Arsal over ties to terrorist groups, as calm returned to the northeastern border town after residents from neighboring al-Bazzaliyeh reopened a vital road they had blocked in the wake of the execution of captive soldier Ali al-Bazzal.

“The Lebanese army raided a camp in Arsal and arrested a person who has ties to terrorist groups,” MTV reported.

It noted that communication between the town and its neighbors was resumed after the checkpoint erected by al-Bazzaliyeh residents was removed two days ago.

“The al-Labweh-Arsal road has been especially reopened to displaced Syrians living in refugee camps, except for fugitives, and the General Security department in Baalbek is facilitating the transactions of dozens of them,” the agency added.

As for the town's outskirts, the army continued its security measures at its checkpoints “against security violators,” NNA said.

“The owners of stone-crushing plants and stone quarries are moving freely and without restrictions between Arsal and the mountainous area of Wadi Hmayyed,” the agency noted.

It also said journalists have been invited to visit Arsal to assess the situation on the ground.

Al-Joumhouria newspaper reported earlier on Thursday that the army was carrying out strict security measures on the town's outskirts and blocking crossings that could be used by terrorists without imposing any “siege” on the village.

A military source stressed in comments that “Arsal is not under any siege and all the roads leading to the town are open... The army is only imposing security measures by carrying patrols to protect its residents from any harm.”

The comments come a day after al-Mustaqbal Movement chief Saad Hariri held the government responsible for ending the “siege” imposed on Arsal and called on the army to restore the state's authority.

The source remarked that “roads which link Arsal with the Bekaa are open,” adding that “the residents of the town can move freely.”

“The threats against the residents of Arsal are old and imposed by the tribal mixture and the increase in tension, but the army is working on eliminating the friction,” the source said.

“The army will not allow any town to impose a siege on another.”

Tensions were high over the weekend following the execution of policeman Ali al-Bazzal by jihadists, who are entrenched on the outskirts of Arsal.

Angry protesters in his hometown of al-Bazzaliyeh blocked roads in the area in order to cut off aid to the outskirts of Arsal, where the servicemen are reportedly being held.

Four have been executed so far, including al-Bazzal over the weekend, and the jihadists have threatened to kill the remaining hostages unless there is a deal to free Islamist prisoners in Lebanon.

The Lebanese Army is also carrying out precautionary military operations against posts controlled by gunmen on the outskirts of Arsal and the Syrian Qalamun region.

True Mystic, and neither will it be tied by M8. The army is now showing that it intends to emancipate itself from the grips of the politicians and lest we wish to forget, this dynamism has been started some years ago by the then general of the army, Michel Suleiman. Today as the army gains more control of its command structures, it is also and by the same token gaining the trust and respect of the people. I very much believe that almost every single Lebanese has it in the heart, that once the army neutralizes all the Jihadists in our country, it will then focus its attention to regaining Lebanon's sovereignty from the grips of Hezbollah and the other parties that have tied their umbilical chords to it. The time has dawned when we all either live as equals, or the inequality will bring us ALL to our knees. Hezbollah has a major role to simplify the route of the army.

Let the army get resupplied first of all, do not wait for a false french/saudi deal. Do you see any objection from me, in the LAF battle against takfirism? No I support the Army in their struggles against any Israeli/american plot, while you claim to support it, but under the table, you shake hands with M14, and stab the LAF in the back.

Only hope for Lebanon, is the LAF and the Resistance. Resistance stands as the wall, between Lebanon and Syria, and the LAF stands inside Lebanon to deal with any takfiris whom might sneak past.

Mystic, here I believe on the same side of the fence, I am 100% against takfirism and that's for sure, but then why do you always have to start by lambasting M14, is M8 any better? Is M8 an less the evil? Then you saw my hand under the table? 3an jad shou elak jalad, I had an itch and needed to scratch. Am I the only man who has to do such things ya man? Come now keep your eyes above the table, it's a different world.

the terrorist sectarian murderers hizbushaitan are the ones performing a siege on Arsal residents, thus they are calling for a genocide between sunnis and shia across Leebanon.
such actions should stop immediately otherwise the shia willlearn the hard way how to stop their terrorist actions.

geha, your corrupted mind is filled with Saudi oil cash. Just like the rest of Mostaqbal.

The army needs to defend themselves against the takfiri swarms your Gulf masters are funding, this is a battle for Lebanons sovereignty & freedom, not against any sect.

Takfirism is not a sect, but a scourge that needs to be eliminated.

if the action of placing a siege on the sunni town of arsal by shia fanatics is not a heinous sectarian action, then I do not know what is.
tell your nasrallah to stop sectarian provocations like this one otherwise he will ignite the whole of Lebanon soon.
the army knows how to perform its business and what is required is the removal of the blockade installed by your shia friends of the terrorist militia hizbushaitan.

geha, your continued support for the takfiri groups, proves where your real loyalties lie, if you were even 1% Pro Lebanon, then you would support the Army in this battle.

The Resistance are not in Arsal, it is the LAF fighting there, for the sake of Lebanese unity, everyone should support them.

The Resistance does not want a secterian war.

The army is securing Arsal, and freeing it's citizens from the takfiri militants.

By evacuating the civilians, and providing them security, is not an attack on any community, but purely and anti terrorist operation.

The LAF are proudly being steadfast, they will not have their hands tied by M14 this time.

mystic: are you blind or you do not understand what is written?
1- I do not support terrorists in any way, shape or form.
2- we are talking about the town of Arsal that besieged and not the outskirts of arsal where the terrorists are hiding.
I hope this clarification is clear enough for you :)

HA and its terrorist followers ruined this country. They erect armed checkpoints, they kidnap and kill people, and act as if they are above the law. Everybody knows who is besieging arsal.. it is the armed militia thugs.

criminal terrorist organization led by fanatics and followed by lunatics

Enjoy your brief moments of glory with your 2 and 3 up votes. When Flamesrower checks in he will reduce you and your comments to ridicule and plenty of down votes. Somesing Anazar Flamesrower!

General Kahwaji, take the matter in your own hands and free the hostages ,give them all , to return your fellows.you can do it, and nobody will blame you.