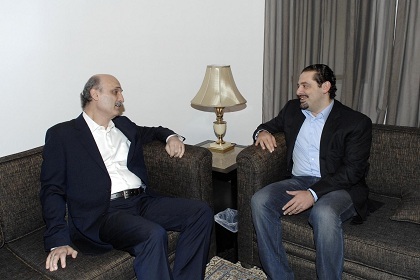 According to state-run National News Agency, the delegation was led by head of al-Mustaqbal bloc MP Fouad Saniora and Interior Minister Nouhad al-Mashnouq.

According to As Safir newspaper, the delegation will join discussions regarding the presidential elections, upon a request by ex-PM Hariri.

Sources told the daily that the withdrawal of Geagea's candidacy is one of the options that will be tackled with Saudi officials.

The sources said that the retraction of the LF leader's candidacy will be accompanied by the nomination of another.

On Tuesday, Hariri held talks with Geagea, who is currently in Saudi Arabia on an official visit, in Riyadh.

A statement issued by Hariri's office said the meeting underlined the need to “continue consultations and discussions aimed at overcoming the current political crisis and electing a president as soon as possible.”

The LF leader had arrived in the Gulf kingdom on Sunday.

Free Patriotic Movement chief MP Michel Aoun is still the candidate of the March 8 camp in the face of Geagea, the nominee of the March 14 forces.

May all your days RIP dear flamethrower

His 5 of 55 accounts disagree, must be a dull night since Khomeini wasn't on.

As Safir once again at the forefront of professional and trustworthy breaking news.

will you be spamming the forum from now on?

Of course the caporal can be trusted to not receive multimillions from Iran...

unfortunately your hizb will kill them