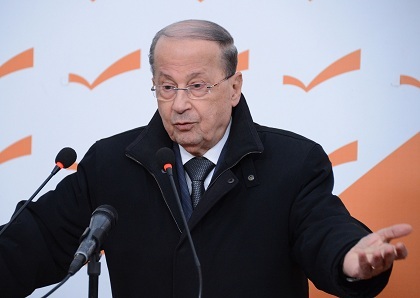 Head of the Free Patriotic Movement MP Michel Aoun met on Wednesday with a delegation from the families of the servicemen who were kidnapped from the northeastern border town of Arsal in August.

He said after the talks: “An officer from the Internal Security Forces and another from the army should be tasked with keeping the families up-to-date with the developments linked to the case.”

The MP hoped that the ministerial crisis cell tackling the issue would take his proposal into consideration.

He declared that the families have the right to know what is happening with their loved ones.

“We discovered that we have wronged them because we know nothing of the negotiations,” Aoun said.

“We should change our attitude towards the families, who should be in on the truth,” he stressed.

Asked by reporters if the state should carry out negotiations with the gunmen to release the captives, he replied: “Any negotiation has a price.”

The policemen and soldiers were abducted by Islamic State and al-Nusra Front gunmen from Syria in the wake of clashes in Arsal.

A few of them have since been released, while four were executed and the rest remain kidnapped.

Muslim Scholars Committee member Sheikh Wissam al-Masri revealed on Wednesday the al-Qaida-affiliated al-Nusra Front pledged to release a soldier or more servicemen in its captivity if the state officially tasks him with the negotiations, a day after the group denied that he has been asked to mediate with the cabinet.

On Tuesday, a prominent al-Nusra Front leader denied the appointment of al-Masri to negotiate the captives' release.

The group said that the four-month hostage crisis would end if 10 inmates held at Lebanese prisons would be freed for each hostage or seven Lebanese inmates and 30 female prisoners held in Syria would be released for each abducted soldier and policeman or if five Lebanese and 50 women inmates would be freed.

Allah ykhalilna hal talleh..... hidden in one of his braveand capable suns in law house (Castel s)... far away from envious eyes of abu jamra and and and the rest of lebanese... so what let they guy rest in peace.

“We discovered that we have wronged them because we know nothing of the negotiations,” Aoun said."

But Bassil is part of the so called crisis cell...

it seems abbas ibrahim is no longer acceptable for the old man.

May you RIP dear flamethrower

pure demagoguery that fools no one... coming from the one who sent his soldiers to the slaughter house...

Indeed a unique capabilities that rarely come to poses one individual even if he have lack of vision, conscience, honor, dignity but still have the ability to obstruct a whole nation, aid bring us under the Claus of Iran and irs monstrous sectarian religious institutions that have no null zero regard to Lebanon .. all it's efforts with the help of this old man goes toThe Iranian revolutionary Guard's higier goals not even to pointing Aoun as president.

who let our soldiers leave arsal ?the culprits are terrorists as isis and nousra

Maroun that's exactly what I thought. Aoun: what developments are taking place? What is there to keep the families up to date? That the negotiations have failed for four months?? That more of their loved ones are about to be executed??

A traitor....who once said : "I will be the last one yo leave. The captain of the ship stays till the end", and he ran away leaving thevarmy with no orders and his wife and 3 daughters.
He is the man of Iran and is totally corrupt....what a change from honest and patriot to liar and traitor...

A traitor....who once said : "I will be the last one to leave. The captain of the ship stays till the end", and he ran away leaving the army with no orders and his wife and 3 daughters behind...
He is the man of Iran and is totally corrupt....what a change from honest and patriot to liar and traitor...

Left his wife and daughters for the Syrian soldiers to rape. Isn't it ironic how Hobeiqa's bodyguard stopped it and HK escorted them to the embassy himself lol

Sorry Flamey, he just left his wife and daughters in Baabda Palace as he drove out in a tank...

Excellent question! And please no Kannan not any more ... do I have to beg?