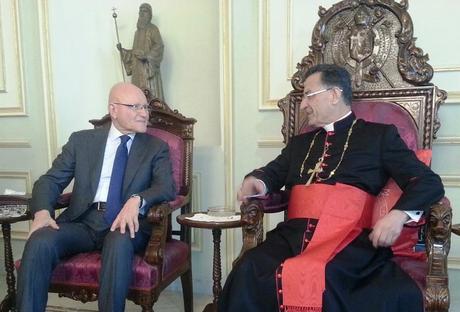 Prime Minister Tammam Salam expressed hope on Wednesday that the dialogue between Hizbullah and al-Mustaqbal movement would contribute to the election of a new head of state.

Following talks with Patriarch Beshara al-Rahi in Bkirki, Salam said he had high hopes that talks between the rivals would create some kind of “reassurance” for the Lebanese people.

The dialogue could reflect positively on all crises, he said, adding: “I look forward that it expands” to include all other parties.

The first round of talks between Hizbullah and al-Mustaqbal representatives was hosted on Tuesday by Speaker Nabih Berri in Ain el-Tineh.

Salam reiterated his call on all political parties to prioritize the presidential polls.

“A body without a head is not complete,” he told reporters.

“We want a Christian Maronite president,” he said.

“We want coexistence to continue. One of its basic elements is the presence of a new head of state,” added Salam.

He said he visited al-Rahi to extend his greetings on the occasion of Christmas and New Year.

But the PM expressed regret that Lebanon is suffering from a hostage crisis during the holidays.

He urged all parties and the media not to trade with the lives of the policemen and soldiers who were taken captive by jihadists when they overran the northeastern border town of Arsal in August.

“All important and necessary issues require time to be resolved,” Salam said.