Qmati to Assume Tasks of Abou Zaynab after Sudden Resignation 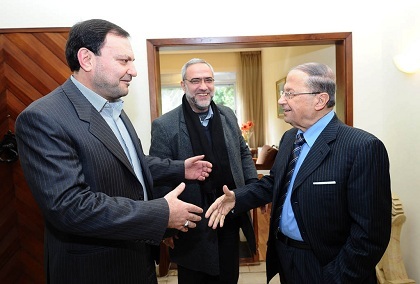 “Abou Zaynab's resignation from handling Hizbullah's ties with Christian political parties has no links to the party... It is personal,” Qmati said in comments published in al-Joumhouria newspaper on Monday.

Qamti stressed that he worked along with Abou Zaynab on different levels and coordinated and cooperated in all matters.

The official told the daily that he helped in drafting a 2006 landmark memorandum of understanding with Hizbullah's main Christian ally, the Free Patriotic Movement.

He pointed out that they were both in Bkirki's dialogue committee and dealt together with Christian parties affiliated with the March 8 alliance – the FPM, Marada Movement and Tashnag.

“After Abou Zaynab decided to step down I was appointed to follow up his tasks due to our previous cooperation in talks with the Christian powers,” Qmati told the newspaper.

He lauded the “extraordinary” efforts exerted by Abou Zaynab, considering that he achieved important accomplishments in ties with the Christians.

“We will continue his legacy and accomplishments until he returns to his tasks or when his special condition ends.”

Abou Zaynab's resignation came as a shock as he has been in charge of dialogue with Christian parties for the past 14 years, and took part Friday in a Hizbullah delegation that offered Christmas greetings to Maronite Patriarch Beshara al-Rahi in Bkirki.

Abou Zaynab is known to have close ties with the FPM.

He was also part of the Hizbullah delegation that attended the Vatican ceremony that promoted Patriarch al-Rahi to become a member of the elite College of Cardinals -- the body that advises the pope in the governance of the Catholic Church and elects his successor should he die or resign.

“We will continue his legacy and accomplishments until he returns to his tasks or when his special condition ends.”

What legacy was that? terrorism, drug trade, sectarianism, stealing the country's resources.... that is for sure the legacy of the terrorist party.

lol your slander never stops does it? keep repeating it, maybe someday you'll even believe it yourself.

It appears that About Zaynab is a close relative of the hezbollah spy shawrba who was caught spying for Israel. Other reports indicate he was involved in some serious financial misconduct.

Sources close to Hizbullah to al-Jadeed: Abou Zaynab was in the convoy of the Ashrafieh incident but the issue has nothing to do with his resignation.

Hizbullah is even bigger than the state now. It has members/officials that specialize in overseeing Hizbullah's relationship with Christian parties; Druze parties, Sunni parties, Armenian parties... Such arrogance!

Ebola has named the Caporal to ensure the void.

i guess there must be some common issues that matter specifically to christians, and a specialist would know better how to respond to those specific requirements.

but tell me, would you prefer the takfiri approach? the one-size-knife-fits-all?