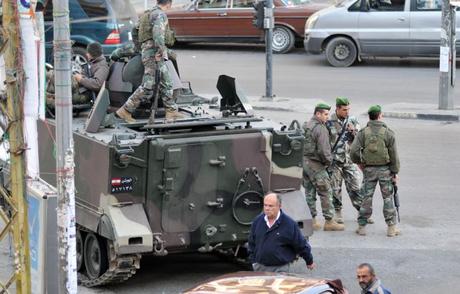 “He is accused of transferring explosives to the Ain el-Hilweh camp,” the NNA added.

The army and other security agencies have recently arrested dangerous fugitives who were planning bomb attacks inside Lebanon, the last of which was Mahmoud Abou Abbas, one of the Qaida-linked Abdullah Azzam Brigades leaders.

Abou Abbas has been described as “another Naim Abbas,” another top leader of the Azzam Brigades who was arrested by the army last February in Beirut's Corniche al-Mazraa.

Abbas was charged with being part of a terrorist cell that prepared and transferred booby-trapped cars from Syria to Lebanon to blow them up in residential areas, in addition to plotting to commit terrorist acts inside the country.

The Ain el-Hilweh camp is known to shelter scores of Islamist fugitives, such as extremist cleric Ahmed al-Asir and al-Nusra Front-linked militant Shadi al-Mawlawi, who took part in the recent battle against the army in Tripoli.

when is the Lebanese government finally gonna decide enough is enough and flatten this camp out, where do you draw the line, it seems like everyone escaping justice takes refuge in this camp, enough is enough.