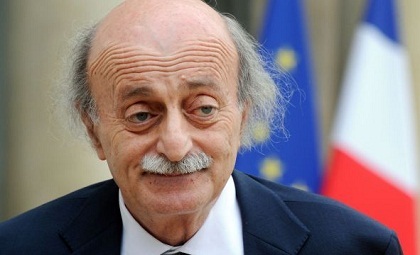 Progressive Socialist Party leader MP Walid Jumblat stressed on Thursday that Lebanon couldn't endure the repercussions of a new war, expressing belief that Israel can't afford to engage in any battle at this stage.

He pointed out that “Israeli Prime Minister Benjamin Netanyahu can not launch a war at this stage, especially with the elections at the doorstep.”

However, the Druze leader noted that Netanyahu's “craziness and adventures are unpredictable.”

“I still fear from entering in chaos.”

Hizbullah fired on Wednesday a salvo of missiles at an Israeli military convoy in a disputed border area, killing two soldiers and triggering deadly clashes that marked the most serious escalation since the sides' 2006 war.

The flare-up, which also left a U.N. peacekeeper dead, added to the regional chaos brought on by neighboring Syria's civil war. Hizbullah indicated the attack was in retaliation for a deadly Israeli strike on its fighters inside Syria's Quneitra earlier this month.

Lebanon's Foreign Ministry noted on Wednesday that Hizbullah's attack did not violate the Blue Line that was demarcated by the U.N.

Just add a red nose on the pic and what would you get?!

Looooooooooool Jumblatt is the smartest politician in Lebanon! Hezbollah's retaliation is okay because Shebaa Farms is Syrian territory!

At first I was against the retaliation (because I'm a Zionist as Flamey and Mystic claim), but now because Jumblatt reopened the whole Shebaa Farms issue i.e that it's Syrian territory and not Lebanese as Hezbollah claims -- I will actually adopt this stance on the Hezbo retaliation.

I did seek help. The shrink didn't diagnose me with anything, instead I convinced him of my views. He started paying me to lecture his other clients about politics, and within a few months, all of his clients' mental health improved.

War will not break out because these last exchanges between Hezbollah and Israel have occurred in the Golan Heights and not on Lebanese territory, so Hezbollah is not provoking Israel to attack Lebanon (unless Hezbollah now fires rockets from Lebanese territory) so this goes to show that even Hezbollah knows that the Golan is Syrian territory. Through their actions, Hezbollah have contradicted their own propaganda lmaooooooooooo

Israel has much to lose, how do you figure? Hezbollah, along with all the other Lebanese groups, are carrying the Zionist plan. Hezbollah and Israel have a pre-planned game of chess, where only the pawns are eliminated (100 IDF casualties, unknown number of Hezbo casualties as they blend in with civilians), and ahwe is split all over the chessboard i.e. Lebanon's infrastructure is entirely destroyed. Israel claims military, victory, Hezbollah declares divine victory, the residents of Dahye celebrate by drinking Laziza non-alcoholic beer, all while the Lebanese Republic loses. It's an agreement between Israel and Hezbollah to keep the state weak.

Of course I was referring to the fake Hareb Tammouz in 2006. I'm saying if "war" breaks out, this is how it will go.

Lol I love how comments are mysteriously deleted to make me look like I'm talking to myself...

Why doesn't the glorious resistance liberate Shebaa farms and stop talking about what they will do. It has been an issue according to them since 2000. Declare Shia Jihad on Israel and liberate the farms instead of sending comforting messages to Israel saying they do not wish to escalate the matter.

Jumbo receives correct info from the Druzes in Israel who are totally loyal to Israel and are part of the army with some high level rankings.

Hizbullah knew that Israel's retaliation would be minimal. The IDF just finished destroying Gaza and is no mood to get into a war it's not ready to win yet. Dumbo Nataniahu barked a bit and now will go to the US to cry to the Jewish lobby and collect some cheques.

The problem though is looking at what the Houthis are doing in Yemen. They too have no respect for what they agree on, and that's why Hizbullah will remain a big problem in Lebanon, deciding peace and war, until Iran says it's time.

Shame on you Naharnet to censor and erase comments!!! The founder of this newspaper has been assasinated for the freedom of speech while you censor !!!

Mr. Jumblat, another rich warlord, who has solid bunkers in several parts of Lebanon. Mr. Jumblat, another warlord, who has massive bank accounts everywhere in the globe, plus everything it takes to secure survival, logistics, resources and of course the crucial state of lying and deception. Mr. Jumblat, if you where Mr. average Lebanese man or woman, having to work possibly two jobs to make ends meet, if you had loved ones that live in simple apartments like do all of us, you would be talking very differently. Right now not only are you another jester, but you are also a damn hypocrite who has long since exhausted all reasons to exist. You are no more worth than an old rotten plank of old wood, not even worth to kindle a small fire. That is called trash ya Mr. Jumblat, serious trash.

don't worry: a childish revenge... just because his majesty nasrallah want his sheep to believe he is strong but right away says: "we were just kidding! we do not want any escalation! " LOL
in both cases it shows the stupidity of this militia and how they spit on the lebanese government and the lebanese people as usual....