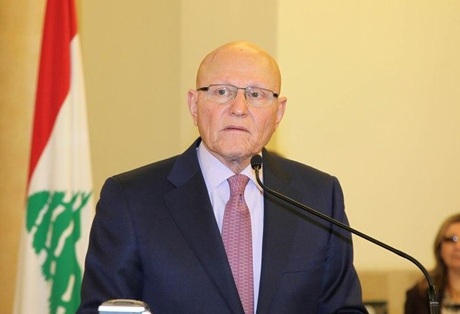 Prime Minister Tammam Salam arrived Thursday in Germany at the head of a ministerial delegation to take part in the three-day Munich Security Conference (MSC).

Salam is expected to address around midnight Friday more than 40 heads of government and state, along with 60-odd foreign and defense ministers including U.S. Secretary of State John Kerry and Russia's top diplomat Sergei Lavrov.

His 10-minute speech will focus on the Lebanese army and its battle against terrorism, which compels fortifying its military capabilities, al-Joumhouria newspaper reported earlier on Thursday.

Salam will tackle the lingering Syrian refugees crisis, reiterating its impact on the security, social and economic levels in Lebanon.

U.N. refugee agency UNHCR has registered 1.5 million arrivals, but many more are thought to be in the country unregistered, and thousands have entered Lebanon through illegal crossings.

The influx has tested the country's limited resources, as well as the patience of its citizens, particularly as security has deteriorated.

The premier is expected to hold meetings with heads of state on the sidelines of the conference.

The event's organizer, veteran German diplomat Wolfgang Ischinger, said the meeting will discuss what he called an unprecedented upsurge in global crises over the past year, and the inability of the international community to tackle them.