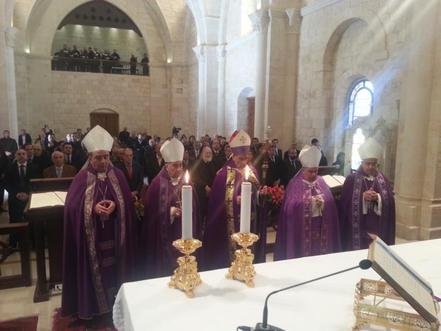 Maronite Patriarch Beshara al-Rahi criticized on Sunday the performance of the cabinet, stressing that the government should not carry its tasks presuming that the presidential vacuum is a “normal” crisis.

“The cabinet has no authority to carry out the jurisdiction of the head of state unless it was exercised according to consensus and without the creation of mechanism that violates the constitution,” al-Rahi said during a sermon at Bkirki.

In line with the constitution, the cabinet began exercising the president’s prerogatives after the parliament failed to elect a successor for Michel Suleiman, whose term ended in May last year.

The ministers agreed that all decisions should win a unanimous backing. But such a process hindered the government's work over the veto right that certain cabinet members began to exercise, prompting Prime Minister Tammam Salam to suspended cabinet sessions over the failure of the ministers to agree on changing the current mechanism.

The patriarch also slammed the violation of the constitution, the National Pact, and coexistence, pointing out that the offenses culminated with the failure to agree on a new presidential candidate.

Dear Batrak,
There is a traitor inside the house destroying the Christians for the next hundred years...!!!

it is time for al rahi to name things BY NAME and let his followers know who stands behind the destruction of the state. Of course, it is the mad man who is calling himself the protectors of the christian rights in the east, the one and only aoun the clown

By the National Pact, Christians were assigned seats in Parliament at a six-to-five ratio to the disadvantage of non-Christians. This is the Christian idea of equality and coexistence, and if this Christian idea is violated, the Christian warlords led by the Patriarch will destroy the country. Is that the Gospel? Do I understand it? How does the Patriarch justify accepting the mere fifty-percent share of Parliament for the quarter of the population nominally Christian under the newer Taif Accord? Has he repudiated that change? Is that change not within the will of the God of Love who spent his lifeblood on the cross for the salvation of all Lebanese Christian warlords and their minions?

Hezballah love this chris guy, he says in public what they used to say in public but now only say in private because they need to keep up the appearance.

Is HA Lebanese? Are the Takfiris Lebanese? Exclude these two groups (along with SSNP) and then abolish all Sectarian provisions and Quotas as per any and all accords. I do not care what someone's sect is, I only care about their Patriotism and loyalty to Lebanon, its constitution and flag and believe in Democratic ways of governing. For this to happen any armed groups,outside loyalties and violation of laws must be declared as treason and dealt with accordingly.

M14.art....
I am glad you differentiated between Mostaqbal and Takfiris (this is progress). Mostaqbal may not be as Lebanese as they could/should be but they are 100 times more so than HA.
F.T....
The mask has finally fell of your face, no wonder you support FPM as they are bought and paid for by HA and its Iranian Mullahs. I always knnew you did not have much love for the Christians, neither does HA.

f.t.
The mask has finally fell of your face, no wonder you support FPM as they are bought and paid for by HA and its Iranian Mullahs. I always knnew you did not have much love for the Christians, neither does HA.
Also I am thankful; for finally saying and explaining the real reason for HA arms, all M14ers agree with you in that the arms are more for dominating Lebanon not liberating Palestine. All HA members share your opinion as well but did not have your courage. Only ones fooled are FPM members and Aoun supporters who think HA is their champion of defending Christian rights and proteccting them from Sunni extremists.