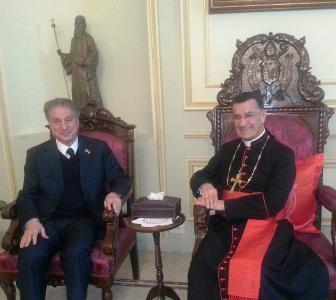 Kataeb party leader Amin Gemayel considered on Monday the ongoing presidential vacuum unacceptable, calling on rivals to prioritize the election of a new head of state.

“We are surprised by all the measures taken... which aim at ridiculing the presidential vacuum,” Gemayel said after talks with Maronite Patriarch Beshara al-Rahi in Bkirki.

He expressed fear on the fate of the Christians' top state post, considering the presidential stalemate aims at depicting that the state can go on without its head.

Lebanon has been living in a presidential vacuum since May when the tenure of Michel Suleiman ended. The conflict between the March 8 and March 14 camps has thwarted all efforts to reach a quorum at parliament to hold elections and end the vacuum.

“We are only concerned with urging politicians to prioritize the presidency and rivals to include the matter on the agenda of their dialogue,” Gemayel told reporters.

Political disputes between the various political factions on the government's mechanism led to the suspension of sessions in light of the vacuum at the top presidential post.

Gemayel warned that he will block the way on those who are trying to “portray the presidential vacuum as an acceptable matter.”

“We should elect a new head of state to fortify the state institutions.”

The Christian leader continued: “We are discussing the pointless issues when we should be electing a new head of state.”

“If we don't elect a new president, then we will lose track of what is important,” he added.

Gemayel later headed to the Center House where he met with al-Mustaqbal chief and former Prime Minister Saad Hariri.

Please NOT the Caporal NOR Amine.

Caporal is destroying the institutions and the Christians for the next one hundred years.

@the cultured classy best example of a highly educated Shiite

Who is this extreemly edicated human here, angry from looking at dates and quotes from leaders of the shiite extremely educated humans. What makes their word so effective is Aoun legitimizing their vote in the parliament and, of course Iranian, strange and unlimited, and unblanced help to, Shi3a only, led by HizEbola and spread to some allying forces including Amal and the Aouni establishments and Iranian fully funded TV.

Some politicians are being paid real cash to keep the Lebanese sleeping giant asleep. In the Middle East, there are some who fear our awakening because when we wake up, they'll have no choice but go to Dodo. You guys want the cat out of the bag? Well, this is the first paw.