Australians to Be Moved to Indonesia Execution Site 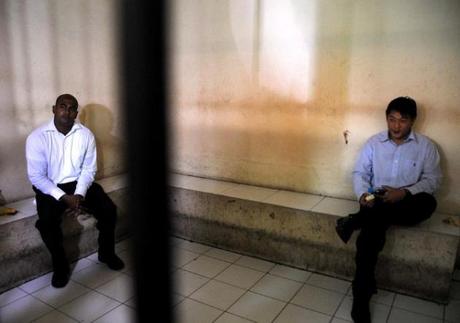 Two Australian drug smugglers on death row in Indonesia will be transferred Wednesday from their jail on Bali to an island off Java where they will be put to death, an official said.

Andrew Chan and Myuran Sukumaran, the ringleaders of the so-called "Bali Nine" drug trafficking gang, will be flown on a military aircraft, with a second plane escorting them, said Momock Bambang Samiarso, head of the Bali prosecutor's office.

Officials are yet to announce a date for their executions, but the transfer indicates it is imminent. Their lawyers said that pushing ahead with the transfer and executions would amount to a "miscarriage of justice" as legal challenges are still ongoing.

The men, in their early 30s, were convicted of trying to smuggle heroin out of Indonesia in 2005 and sentenced to death the following year.

They recently lost their appeals for presidential clemency, typically a death row convict's last chance to avoid the firing squad, and their looming executions have strained ties with Australia, a neighbor and key ally.

They are among a group of 10 drug convicts expected to face a firing squad in the upcoming batch of executions. Officials have not confirmed the nationalities of the others, although convicts from France, Brazil and the Philippines are among those who recently lost their appeals for presidential clemency.

Australia, Brazil and France have been piling diplomatic pressure on Jakarta, but President Joko Widodo has been a vocal supporter of the death penalty for drug traffickers, saying Indonesia is facing an "emergency" due to rising narcotics use.

Following a meeting of officials on Tuesday, Samiarso told reporters that "the coordination has been completed" and the Australians will be transferred on Wednesday.

They are being moved to Nusakambangan island, which is home to several prisons. Five people, including foreigners, were put to death on the island in January, sparking a diplomatic storm.

Attorney-General Muhammad Prasetyo said Tuesday that execution preparations were "95 percent" complete, and the last stage was gathering all the prisoners on Nusakambangan. Some of them are already on the island.

Authorities must give convicts 72 hours notice before they are put to death.

The Australians' legal team has recently launched several attempts in the courts to save them from the firing squad, and their lawyer Todung Mulya Lubis said that moving forward with the executions would be a "miscarriage of justice".

He said that the legal team had not been notified of the transfer, but added: "It is not fair, it is not justice, if they go ahead with the transfer, with the executions, if there are still legal processes.

"What is the point of having all this legal recourse available, provided to you by the law, if they do not respect that."

Judges have already thrown out an application for a second judicial review of their cases, as well as a challenge to Widodo's decision not to grant them clemency.

The lawyers have lodged an appeal to the decision to dismiss that challenge, which has not yet been ruled on.

Australian Prime Minister Tony Abbott has repeatedly called for Jakarta to halt the executions, and vigils have been held in Australia calling for Widodo to show mercy.

Brazil and France have also been ramping up pressure, with Paris summoning Indonesia's envoy and the Brazilian president refusing to accept the credentials of the new Indonesian ambassador.