U.S. Anger over IS 'Atrocity' against Christians in Libya 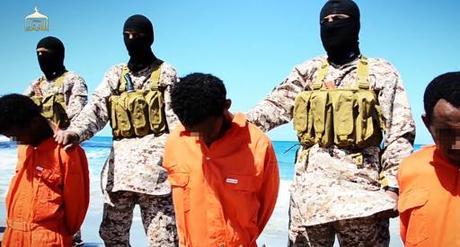 The 29-minute IS video appears to show militants holding two groups of captives, described in text captions as "followers of the cross from the enemy Ethiopian Church".

National Security Council spokeswoman Bernadette Meehan decried the killings and called for stability in Libya, which has been mired in political chaos and unrest since the 2011 uprising that toppled former strongman Moamer Kadhafi.

"The United States condemns in the strongest terms the brutal mass murder purportedly of Ethiopian Christians by ISIL-affiliated terrorists in Libya," she said, using another name for IS.

"This atrocity once again underscores the urgent need for a political resolution to the conflict in Libya to empower a unified Libyan rejection of terrorist groups."

Ethiopia said its embassy in Egypt was trying to verify the video to ascertain if those murdered were indeed its nationals.

"We strongly condemn such atrocities, whether they are Ethiopians or not," Communications Minister Redwan Hussein told AFP.

The video portrays a masked fighter in black brandishing a pistol, who makes a statement threatening Christians if they do not convert to Islam.

The video then switches between footage of one group of about 12 men being beheaded by masked militants on a beach, and another group of at least 16 being shot in the head in a desert area.

It was not immediately clear who the captives were or how many were killed.

Before the killings, the video shows purported footage of Christians in Syria, saying they had been given the choice of converting to Islam or paying a special tax, and had decided to pay.

The video bore the logo of the IS media arm and was similar to past footage released by the jihadists, including of 21 Coptic Christians beheaded on a Libyan beach in February. Several Libyan jihadist groups have pledged allegiance to IS.

Addis Ababa says IS, which has seized chunks of Syria and Iraq and won the support of jihadist groups across the region, has also gained a foothold in Ethiopia.

"There are elements of IS around Ethiopia who are already carrying out operations, even though under a different name," said Redwan, referring to the Shebab group.

"We will keep on fighting them."

Since the 2011 revolt, Libya has been awash with weapons, has rival governments and parliaments, and is on the edge of all-out civil war as armed groups battle to control its cities and oil wealth.

Officials have repeatedly warned that Libya could become a jihadist haven on Europe's doorstep unless the violence stops and a national unity government is formed.

And waves of would-be immigrants including Ethiopians have been using Libya as a stepping stone to embark on perilous sea crossings to Europe. More than 700 people are feared drowned in the latest disaster.

On Sunday, UN envoy Bernardino Leon said after weeks of brokering talks between rival Libyan factions that they had reached a draft accord which is "very close to a final agreement".

Speaking to reporters in Morocco, Leon also said preparations were under way for armed groups to hold direct talks to end the conflict.

Referring to the IS video and fighting in Libya, Leon said: "We know that the enemies of peace, the enemies of the agreement, will be active and be even more active in the coming days and weeks."

The IS execution of Copts in February prompted retaliatory air strikes from Egypt, with President Abdel Fattah al-Sisi pushing for the creation of a joint Arab military force to battle jihadists.

Arab military chiefs will meet on Wednesday in Cairo to discuss how the force will be created, its role and financing, an Arab League official said.

A U.S.-led coalition of Western and Arab nations is already waging an air war against IS in Syria and Iraq.

IS has carried out atrocities against minorities -- including Christians and Yazidis -- sparking fears for the fate of vulnerable communities in mostly Muslim nations.

Where are all the so called Christians on this site?