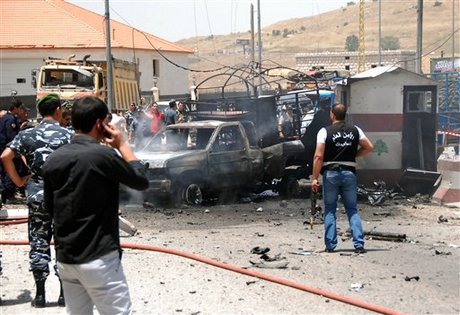 Lebanon is expected to witness a new wave of security attacks by jihadist groups, warned sources to al-Akhbar newspaper on Monday.

They said that a prominent member of the al-Qaida-affiliated al-Nusra Front had recently arrived in the country to lead these attacks.

Known as al-Ashaath and aged no more than 35, he arrived in Lebanon to head a jihadist group aimed at carrying out or coordinating terrorist attacks in the country.

The sources added that the previous waves of attacks had relied on suicide bombers and booby-trapped vehicles, but the new stage will witness “a radical change” in tactics.

“The attackers will not abandon suicide missions, but they will focus more on explosives and 'immersive' operations, because they have a greater impact,” they explained.

“There are no restrictions to what can be targeted,” they added.

“The war against all who permit the shedding of the blood of Muslims in Lebanon will be waged again,” the sources told al-Akhbar.

“The targets will not be limited to Hizbullah or the army, but should the need arise, they will include western interests that are working on oppressing Muslims,” they said.

Meanwhile, a jihadist commander, who was involved in previous attacks in Lebanon, told al-Akhbar: “The previous jihadist strategy has failed.”

He attributed the failure to electronic and security infiltration of the terrorist groups.

He revealed that military barracks and embassies are viable targets for attacks.

Terror groups had in recent months carried out attacks against Hizbullah strongholds in Lebanon, including those in Beirut's southern suburbs of Dahieh.

They had also targeted army checkpoints in various regions in the country.

The security forces and military had in return cracked down on gunmen and terrorists, arresting several suspects.

The most recent operation led to the arrest of dangerous suspect Sheikh Khaled Hoblos, who along with his armed group, had waged clashes with the army in the northern region of Bhannine in October.

Another credible report by mowaten, al akhbar, and al safil.

it looks like hizbushaitan is preparing for a new wave of killings while trying to attribute it to al nusra.

Meanwhile, a jihadist commander, who was involved in previous attacks in Lebanon, told al-Akhbar: “The previous jihadist strategy has failed.”

Amazing how these "jihadist commanders" confide in As Safir and Al Akhbar:)

exactly. the source indicates where the order came from. :)

the huthi leader was indeed buried in dahieh and it was confirmed by many including pro hezbollah journalists and mouthpieces.

were you there really flamethrower?

Alakhbar, your source for the future plans of al nusra, mal qaeda and isil , they get all their info straight from the horse's mouth mr michel samaha, colonel adnan, general mamloukmand the free sujni brigades of baalbek.

so 14'ers are saying that nusra and ISIS are boy scouts and fersen 3adra, and all the bombings they did for the last 2 years, all the assassinations kidnappings were fireworks in the honor of King Saoud of KSA?
Or is it because LAdy gaga sais that ISIS was a big lie that de facto it doesn't exist?
Wake up guys ur leaders made a big Poupou by supporting ISIS against anyone else and now the Lebanese are paying for it big time.
Chukran Qatar (and KSA and Israel and UAE and...)

No kesrweneh from Dahieh, 14'ers are not saying such a thing. You are saying this. The big Poupou is Naiim Qassem claim that without Hezballah ISIL would be in Jounieh. The Iranian fool has a very low opinion of the Lebanese people..
Chukran Qatar was on posters by erected by Hezballah all over the South and Dahieh for rebuilding what was demolished by Hassan Nasrtallah's Laou kountou a23lam stupid war and strategic miscalculation. Without them you'd be still sitting in the rubble eating your own filth.