Hariri Meets Saudi King, Thanks Him for Supporting Lebanese Army 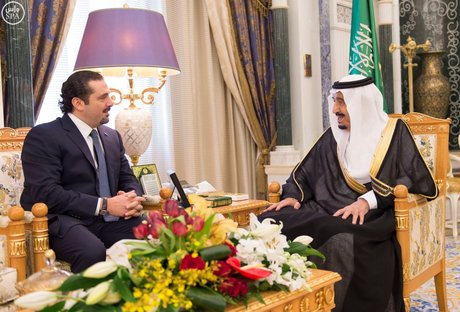 During the meeting, Hariri thanked the monarch for “the kingdom's keenness on Lebanon's security and stability as well as its support for the Lebanese army in terms of boosting its preparedness and strength so that it can confront terror and defend Lebanon's borders,” the ex-PM's office said in a statement.

Hariri noted that “the Lebanese army today received the first batch of military aid as part of a $3 billion donation offered by the Kingdom of Saudi Arabia.”

Earlier on Monday, Lebanon received the first shipment of the $3 billion worth of French arms under a Saudi-financed deal to boost the country's defensive capabilities.

In recent weeks, Hariri defended Saudi Arabia against fierce tirades from Hizbullah chief Sayyed Hassan Nasrallah, who slammed the kingdom over its military operation in Yemen against Shiite Huthi rebels.

thank you KSA for supporting our army and the Lebanese government.

Thanks to all the good people that wish Lebanon good, on top is KSA, USA, UAE, Jordan and France etc and the free world. DAMN all traitors and iranian farsi agents and who ever on their payroll or just like them because they are hate blinded.

is that beloved zainib in your avatar?

the problem is that you bow to iran and you are an extremist shia terrorist not worth 2 cents.

1 cent is toooo much.

Thanks to all that have a kindness similar to all the Saudi People. Will never forget. All sunni shi3a christisn are beneficial from strong Lebanese army unless you have different ahenda.

If you like Iran so much, with its advanced modern civilization of democracy, human rights, freedom of speech, respect for others, tolerance for all beliefs, economic welfare, high level educaton, just legal system, zero corruption, etc... why don't you go there and experience PARADISE for a few weeks ??