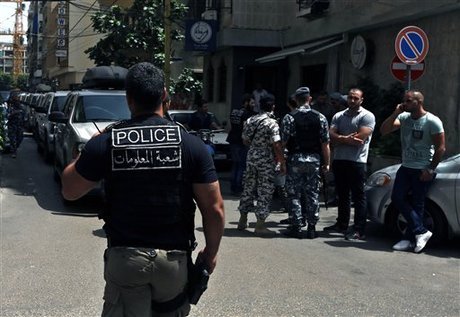 Security forces arrested a number of taxi drivers Thursday evening after they blocked the road at Sidon's al-Nejmeh Square in protest at the new traffic law.

Security forces later dispersed the protesters and arrested many of them, NNA added.

MTV said more than 10 drivers were detained and others were being “pursued” after they “clashed” with police.

The controversial new traffic law took effect on Wednesday despite concerns over the high and unprecedented fines against violations.

Also on Wednesday, Interior Minister Nouhad al-Mashnouq hoped citizens will respect the law “out of their faith in the state.”

“It was adopted to save their lives, not raise taxes,” he remarked.

The contentious law, which angered Lebanese citizens due to the high fines, is set to target major traffic offenses.

It was adopted by the parliament in 2012.

According to YASA, more than 840 people are killed in road accidents every year and more than ten thousand are injured.

Biggest offenders of traffic rules are objecting. They want to be able to speed,weave, swerve, and stop in the middle of a road as they please. Disrespect of any Laws like some Politicians we all know.

taxis are not the biggest offenders, far from it! biggest offenders are politicians and diplomats with their endless convoys of bodyguards driving like all hell broke loose and bullying everyone on the road. near seconds are the police members, burning every stoplight and taking every wrong way to get their taouks on time

it is about time we have good traffic laws.
too many people are dying each year from irresponsible drivers.

How can you have safe drivers on the street when the infrastructure does not allow you to drive safely because of a million violations of building structures etc.

Again Naharnet... What is the new law?

What is wrong with you people? You complain if the state does something or if it doesn't do something. Its a traffic law- that's all. Why the fuss? And yes, politicians and diplomats will most likely still flaunt the law, just like they flaunt all laws. Stop complaining and wear your seatbelt!