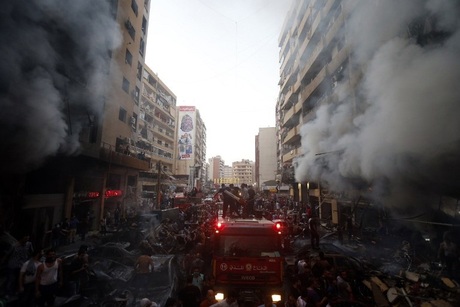 A potential suicide-bomber was arrested in the northern city of Tripoli last week as he was headed to Syria where he was set to prepare himself for carrying out a bombing against a Shiite target in Lebanon, reported al-Akhbar newspaper on Wednesday.

Arrested by the General Security, Mohammed al-Aqla, 22, said he had joined the al-Qaida-affiliated al-Nusra Front in Syria.

He was expected to meet up with the group, which would determine the target of his suicide-bombing in Lebanon.

The suspect confessed to belonging to the group and aspiring to follow in the footsteps of Palestinian suicide-bombers, Adnan al-Mohammed and Nidal al-Mougheer, who both hailed from al-Bisariyeh camp.

Al-Aqla hails from the southern town of al-Bisariyeh in the al-Zahrani province.

His family fled the border town of Yarin in the wake of the Israeli invasion of 1978.

It relocated to al-Bisariyeh where he was raised it its Shiite environment, said al-Akhbar.

He was last seen in the area about three weeks ago and his family was informed of his disappearance about a week later.

He failed to complete his school education and worked in construction sites and gardening.

Recently, al-Aqla became closed off from those around him and he spent his time at prayer in the town mosque that is led by Sheikh Ahmed Abid of the al-Jamaa al-Islamiya.

His father, a retired army officer, is not affiliated with any political party, but his relatives are devout Muslims and known for their good ties with al-Jamaa al-Islamiya.

Al-Aqla's case was referred to intelligence directorate for further investigation.

A number of terror suspects have been arrested in recent months. A number of them have confessed to belonging to terrorist groups and of seeking to stage attacks against various targets in Lebanon, as well as its army.

Who is funding those people?

Another credible report by mowaten, al akhbar and as safil.

"...as he was headed to Syria where he was set to prepare himself for carrying out a bombing ..."
hehehe, he could not "prepare" himself in Lebanon so he had to go to Syria and wear the explosive belt over there or better still choose the rigged car of his liking:)

i could teach you how to carefully pick and prepare mushrooms. there are species for hallucinations and species for some delectable culinary inventions. but, first, you need to show reverence for those who are superior to you, something you are incapable of, at the current time (:

Sowed the seeds? Tell that to the Unarmed Yazidis that got slaughtered without firing a bullet themselves.

Hello guys
Oh well I admit I missed your comments guys. I love the M8 and M14 accusing each other and blaming each other. Keep it up guys!!
On a serious note I see war in the horizon. May God protect Lebanese and Lebanon