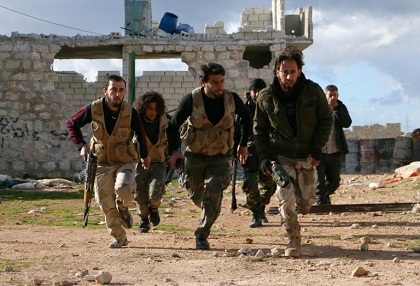 The Turkish government has vehemently denied claims that it is arming rebels fighting in Syria and accused dozens of prosecutors, soldiers and security officers involved in searching the trucks of attempting to bring it down by suggesting it is doing so.

Earlier this month, Turkey arrested four prosecutors who ordered the search of the vehicles near the Syrian border in January 2014 and they are now in prison pending trial.

More than 30 security officers involved in the interception also face charges including military espionage and attempting to overthrow the government.

The footage published on the opposition Cumhuriyet daily's website on Friday shows inspectors searching a metallic container watched by security officers, a prosecutor and sniffer dogs.

The officials first open cardboard boxes marked as "fragile" and full of antibiotics. But under those boxes they find dozens of mortar shells, the video, shot by an anonymous bystander, appears to show.

Cumhuriyet, which also published a series of still images, said the weapons were of Russian origin and had been supplied from ex-Soviet countries.

The daily claimed the trucks were carrying a total of 1,000 mortar shells, 80,000 rounds of ammunition for light and heavy weapons as well as hundreds of grenade launchers.

Tensions over foreign policy are running high in the run-up to the June 7 parliamentary elections, with the ruling Justice and Development Party (AKP) seeking to hold on to the dominance it has maintained since it first swept to power in 2002.

"This is an extraordinary information. It now appears that those boxes contained weapons. These images are very disturbing for the prestige of Turkey," main opposition Republican Peoples' Party (CHP) leader Kemal Kilicdaroglu told AFP.

"Those who illegally sent arms to a Muslim country have blood on their hands," he said, accusing Turkey of aiding a group -- the Islamic State -- it calls "terrorist."

Human Rights Watch said on Thursday the incident exposed "murky dimensions to Turkey's involvement with the conflict in Syria and the Turkish government's concern to prevent any legal scrutiny of Turkish intelligence operations."

The Turkish authorities have sought to link the affair to U.S.-based preacher Fethullah Gulen who Erdogan accuses of running a parallel state through supporters in the judiciary and police with the aim of usurping him.

Turkey has denied aiding jihadists in Syria such as the IS group, although it wants to see Syrian President Bashar Assad toppled.

Thanks to the religion of piece's.

Anything is better than democracy, which is just too much darn trouble. All these people, for heaven's sake: what was God thinking?

Using the word sheep so many times makes you sound like an idiot, fyi...

You mean the part where everyone started worshipping Abdul Wahab and Ibn Taymiyyah that they so very much hate the Saudi King who was brought up by those two pricks? Then again, in as much as we can say, we'll probably only see the two elements of Salafism rot like the Salaf.