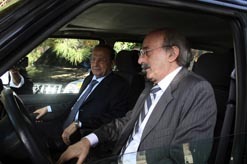 “It's better to advice Hariri not to anger Aoun,” sources close to Jumblat told the daily.

The PSP chief reportedly told Hariri that “the appointment of Roukoz shouldn't be considered as a victory for Hizbullah as even the party's foes, including the United States, consider him qualified to assume such a post.”

However, sources close to Hariri told the newspaper that Jumblat's endeavors are useless as “Aoun cannot impose an army commander on us,” prompting FPM sources to stress that “Hariri cannot ensure the endurance.”

Roukoz is qualified. His association with Aoun is a shadow on his chances of assuming the office for which he is qualified.

Roukoz is a fine officer indeed, no denying this in any way, but as Beiruti rightly said, his association to Aoun the claoun is a dark shadow on him. Then it is not an easy task to replace such a fine, outstanding officer and gentleman as Qahwaji. By the looks of it, Aoun will die and never see another dream of his come true. Nation and family businesses don't mix ya jadbeh Aoun.